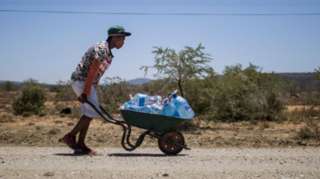 The authorities in South Africa’s Nelson Mandela Bay are racing against time to prevent taps from running dry.

This is known as “Day Zero” and will see close to two million residents without water. A prolonged drought and poor management of water infrastructure have been blamed for the crisis.

A strict water-saving regime has been implemented as the effect of climate change are being felt in Nelson Mandela Bay.

Newspapers and street pole advertisements serve as a daily reminder that residents are only allowed to use no more than 50 litres of water per person per day.

"We're looking plus or minus 10 days that is left into the dams as we speak," said city's water distribution manager Joseph Tsatsire

"We're installing floating pumps into two of our dams... this means that we will be able to get access to dead water that is below the extraction point in the dams."

The poorest neighbourhoods are already suffering where normal access to water is through communal taps which don't work on most days.

Millions of litres of clean water goes down the drain every single day due to leaking pipes.