Zimbabwe fires 77 doctors for embarking on a strike 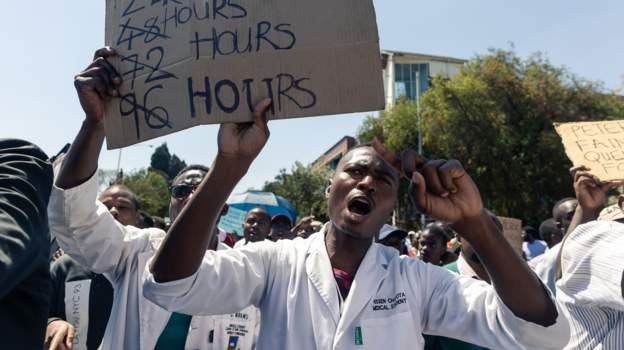 The government of Zimbabwe has fired 77 doctors who have been taking part in a strike since September over pay.

Last month a court ruled that the strike was illegal and ordered them back to work but they defied the ruling.

Hundreds of doctors, who are also on strike, are waiting to know their fate as the government looks determined to keep playing hardball.

It seems unthinkable that they can all be fired because the impact on the already struggling health service would be disastrous, our correspondent says.

Zimbabwe is in the midst of an economic crisis and high inflation has severely eroded people's earnings.

The real value of a doctor's salary has therefore plummeted to the equivalent of less than $100 (£80) a month.

With members of the civil service due to take to the streets on Wednesday, pressure is building on President Emmerson Mnangagwa to find a way out of the economic crisis which continues to make life harder for Zimbabweans.