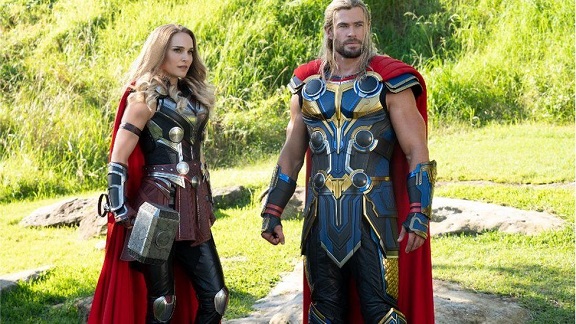 The latest Thor movie has received broadly positive reviews with critics describing it as "fun" but "silly".

Thor: Love and Thunder is the fourth instalment in the superhero series, based on the Marvel Comics character.

In a plot twist, it sees Natalie Portman's Jane Foster returning with superior powers to her ex-boyfriend Thor, played by Chris Hemsworth.

The Guardian said the follow-up to Thor: Ragnarok "repeats some of that masterwork's tongue-in-cheek approach".

In a three-star review, Peter Bradshaw said it was another "cosmic spectacular in the tradition of Mike Hodges' Flash Gordon", filled with "nice gags" and "big cameos", although he "missed some of the major characters" from the previous films.

The plot finds Thor on a search for inner peace after the apocalyptic events of 2019's Avengers: Endgame. But his quest for karma is interrupted by Gorr the God Butcher (Bale) who is seeking the extinction of the gods... Thor included.

To battle this evil, he enlists the help of Valkyrie (Thompson), Korg (Waititi), and his old earthling astrophysicist flame Jane - now in possession of Thor's famous hammer and a red cape of her own.

"The film is probably on its strongest ground with the most purely absurd touches, such as the squabbling rivalry between the hammer Mjölnir, and his new weapon, the axe Stormbreaker - which is always crowding into the frame suspiciously when Thor starts swoonily hanging out with Mjölnir, unable to accept that Mjölnir is with Dr Foster now," wrote Bradshaw.

"Thor himself has conquered his weight issues, and is now a fine figure of alpha-maledom who literally makes young goddesses faint in one scene after he is disrobed and his manhood (or rather godhood) is revealed to them." 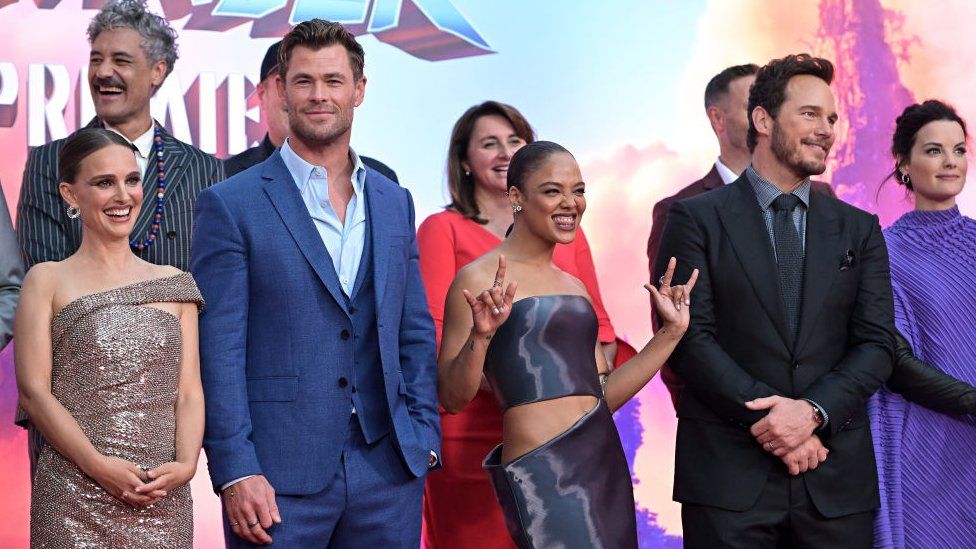 While still full of "silliness", the new film has its "more solemn" moments, Bradshaw continued, with reference to Dr Foster's cancer and references to her chemotherapy.

But it is ultimately "effectively ruled by one cameo", the critic warned, from a big Hollywood name - who we won't name here, don't worry - as Zeus.

The comedy or "self-satire" that has become Marvel's trademark of late, he concluded "is becoming a bit of a cul de sac - but that isn't to say it isn't still funny, and Thor still delivers a mighty hammer-blow, or rather axe-blow, of fun."

The Independent went one better than the Guardian, giving the movie four stars, saying it was an example of "a rare Marvel film that remembers its main audience are kids".

"Of course, Ragnarok's distinctive humour is carried over, and there's a blissfully dumb running joke about a pair of giant, heavy metal-screaming goats," wrote Clarisse Loughrey. "But, really, it's the heart that matters here.

"Love and Thunder's characters are all running towards the same conclusion: That, no matter how long or short our time on Earth (or any planet) may be, we're all inevitably living for the benefit of others.

"We love. Then we love again. It's nice for Marvel, always caught up in its own chaos, to remind us of something so simple".

Loughrey noted how while the previous film had hinted at the bi-sexuality of Thompson's Valkyrie - now the King of New Asgard - the "deadpan nonchalance" she displays after losing the woman she loved in battle confirms it.

"This one has enough wide-eyed boldness and shimmer to earn the designation of fairy tale." 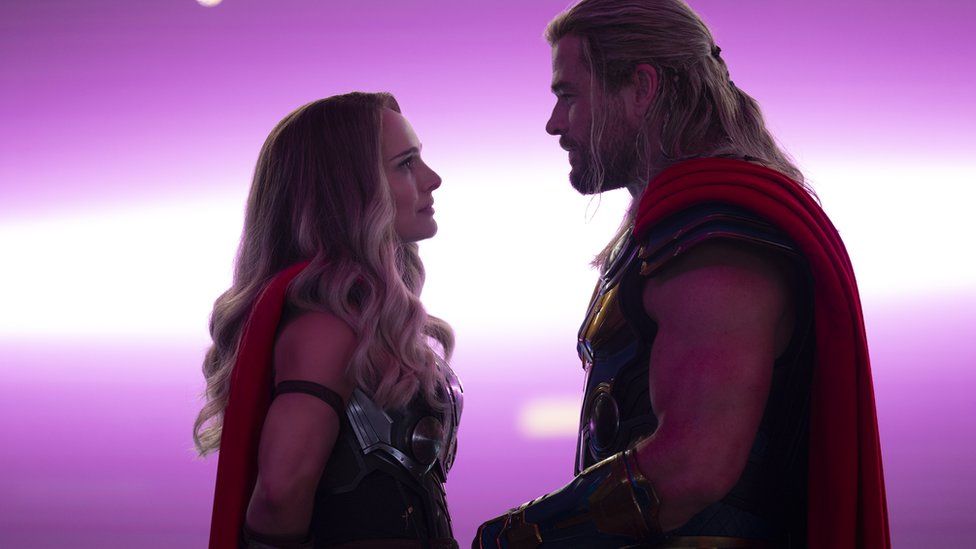 However the Sun said Love and Thunder didn't live up to the expectations of Thor's previous outing - frequently named as one of the best (and funniest) entries in Marvel's 29-movie cannon.

Critic Grant Rollings said the creators had missed an opportunity by not calling it "Thor Four" - but he appreciated Waititi's attempt to re-create Ragnarok's "successful formula".

"By putting comedy into the comic book, Waititi makes Love and Thunder a likeable rumble," he added, while dishing out three stars.

Screen Daily found the production "rousing" and "funny and emotional" if not "occasionally a little unfocused and jokey".

"Impressively, Waititi goes for a darker, more rousing tone in later reels, the one-liners and sight gags taking a backseat to a more sombre exploration of love and sacrifice," wrote Tim Grierson.

"Love And Thunder doesn't always gracefully execute its balance of light and dark but when the film focuses on the unshakeable bond between Thor and Jane, the results can be mighty moving."

Finally, while Dr Foster may have gained equal footing with her godly ex, the new film is still Thor's playground, stressed BBC Culture.

"Disney's marketing talks a good game about how Jane is wielding the God of Thunder's hammer, Mjölnir, and has become a superhero called Mighty Thor," wrote Caryn James.

"True enough, but this is still original Thor's film. Fortunately, Hemsworth is better than ever at making the character the most human, lifelike and appealing of gods, a regular guy except when he's saving the world."

She added: "This big-hearted Thor, thundering and sensitive, may be just the diverting hero we need right now."