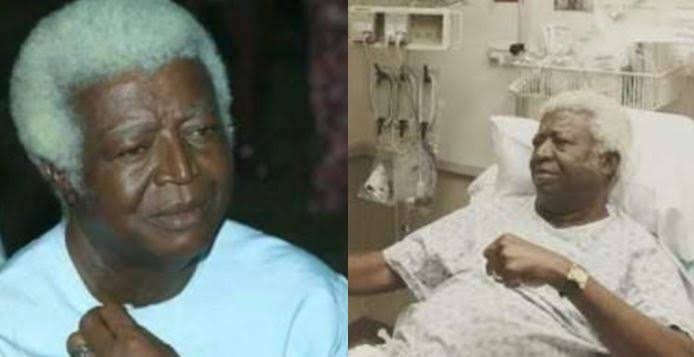 Veteran Nollywood actor, Bruno Iwuoha, has died after losing his battle with diabetes and blindness. He was aged 68. He died at the National Hospital Abuja in the early hours of today Saturday, April 10.

The Abia-state born actor had been in coma for about three weeks before giving up. His body has been deposited at the hospital mortuary. A statement signed by the Director of Communications, Actors Guild of Nigeria, Monalisa Chinda Coker, reads â€œIt is on a sad note that we announce the passing away of our elder colleague and active member of AGN Abuja, Bruno Obinna Iwuoha. He died in the early hours of this morning (10/04/2021) after a prolonged battle with diabetes.

May his soul rest in peace, Amen.

The veteran actor went public about his ailment during an interview with Brekete Family a radio station in Abuja in 2015.

According to the talented actor, he never knew he had diabetes until a violent armed robbery attack that landed him in hospital.

He was quoted as having said, â€œsaid â€œIâ€™ve gone to so many places; within the country, outside the country for treatment, until finallyâ€¦finally, the thing [diabetes] claimed one of my sights (eyes). As I look at you now, Iâ€™m using only one sight (eye). They call that glaucoma.

â€œAnd gradually, itâ€™s affecting the other one. I discovered that this thing [the illness] is a lifetime something. And it has robbed me of the job [acting]. And now, if I get a script, it will be hard for me to read it very well. And if I read it, if I strain my eyes for so long, it would look as if someone would lead me around the house or anywhere I want to go because it will affect the only one [eye]. So thatâ€™s my problem.â€

At the time, he said he needed to be transferred to a U.S.-based hospital where he is required to have N3.5 million.

Shortly after, is the CEO of Morgan Entertainment, Emeka Morgan Oguejiofor, reached out to him and footed his trip to the U.S. as well as his medical bills.

Mr Iwuoha was diagnosed with glaucoma and diabetes.

In January 2021, the Actors Guild of Nigeria launched an appeal fund aimed at providing urgent medical intervention to ailing Nollywood actors and assisting families of late actors. The late actor was listed as one of the beneficiaries of the appeal fund.

Prior to Nollywood, he was a principal registered contractor with National Fertiliser Company of Nigeria (NAFCON) at Onne in Port Harcourt.

His debut movie role was in â€˜Lost Kingdomâ€™ which was shot at Aba by the late Ndubuisi Okoh.

His foray into Nollywood was an interesting one. The producers of the movie needed someone who could play the role of an old man. They wanted someone with natural grey hair and not artificial one.

After several recommendations, his friend, a certain Mr Christopher brought him the script and a letter of invitation stating that he was needed at Wilcox Memorial School at Aba.

The late actor won the Best Supporting Actor at the 2007 Africa Movie Academy Awards for his performance in the movie â€œSins of the Fleshâ€.

A prolific actor, he starred in several award winning movies like World Apart, Magic Cap, Keeping Close, Another Bondage, Faces Of Love and Days Of Hatred. Others are Two Bad Boys, Double Mind, Eagleâ€™s Bride, Forever Yours, Jealous Lovers, My Own Share,My Portfolio, Occultic Battle,The Prince and The Princess and Sins Of The Flesh.

In his lifetime, he starred in over 509 movies with the most recent movie being â€˜Silent Prejudiceâ€™ (2020) which was produced By Chris Kalu.

The 68-year-old actor is survived by his wife and six children.