'Andrew Amuna returns home, but not to stay' by Manasseh Azure 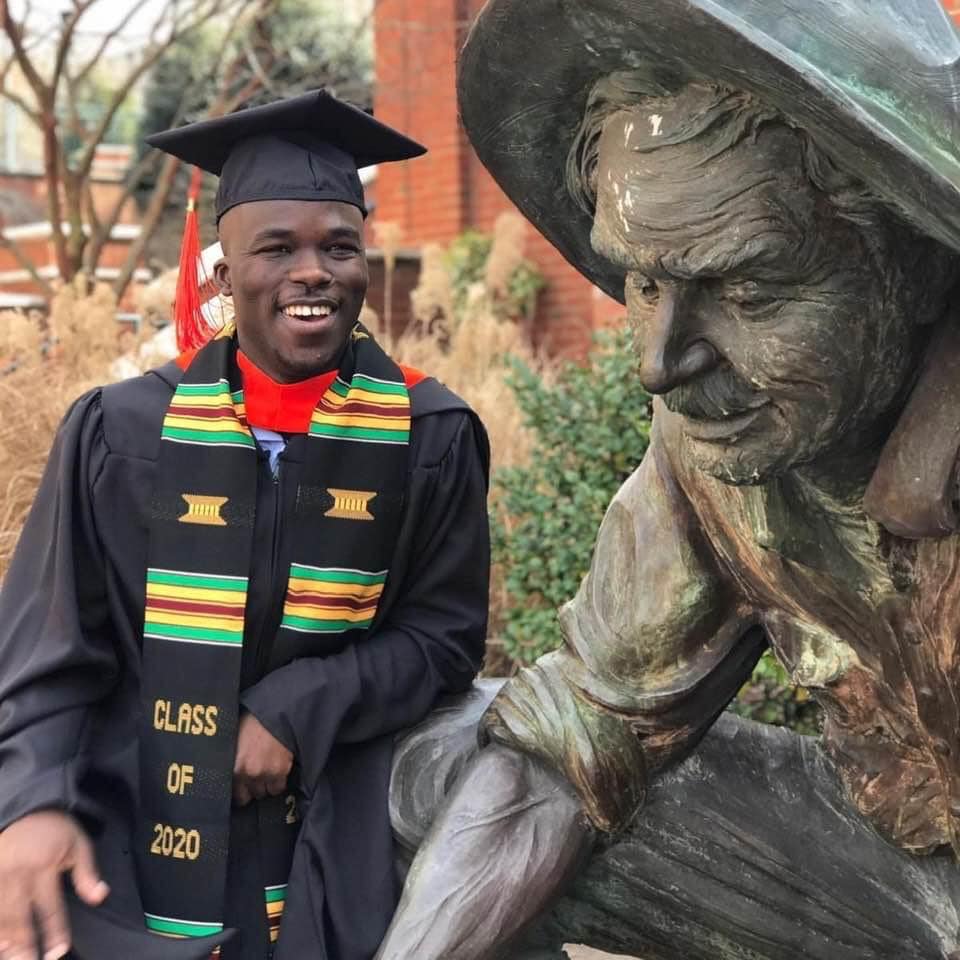 Andrew Mbabila Amuna had missed his mother and father, so he invited them to visit him in the United States. Some months earlier, William and Genevieve Amuna had missed the graduation ceremony of Andrew, a young and promising engineer, who secured a job at Sweitzer Engineering Laboratories, USA, immediately after that graduation.

When Andrew last graduated with First Class Honours in Electrical Engineering from the Kwame Nkrumah University of Science and Technology, his father coincidentally was the guest speaker at that ceremony. It was a proud moment for father and son and the entire Amuna family. But the family missed another proud moment to get together at Andrewâ€™s graduation because their visas were delayed.

They made up for that disappointment when they accepted Andrewâ€™s invitation. Andrew and his elder brother, Fred, worked in the same company. So their parents spent time with their two sons and were looking forward to another memorable visit or homecoming when they said goodbyes.

Less than a week after they arrived in Ghana, however, the Amunas started planning for the return of Andrew to Ghana. It was his final return home, three weeks after his parents returned. But he was not coming to stay.

Andrew arrived in a casket.

Their separation in the US was an eternal farewell. Andrewâ€™s insistence on buying their air tickets was, perhaps, his last way to show appreciation to the wonderful parents who loved and took pride in their three exceptionally brilliant childrenâ€”Fred, Andrew and Mbora.

He arrived in Ghana on Wednesday. And he will be buried today.

The episodic events that characterise Andrewâ€™s auspicious journey to the United States and his gloomy return have been so fast-paced that those close to the action find it difficult to absorb each of the monumental epochs in the 27-year-oldâ€™s life. It is as if they all happened within a long-bated breath, making it difficult to cope with the shock.

Andrewâ€™s journey to the US was significant, and I found it a privilege that he involved me in its beginning through an email he sent to me on June 7, 2018. In our last meeting before that email, he had said that he was applying to study for a masterâ€™s programme in the United States and would send me his statement of purpose to review when he finished writing it.

When that email finally came, with its attachment named â€œSoP-UNCC 180606â€, I did not review it. It was so well-written that even the most critical editorial fault finders would have found no room for improvement. So, instead of replying to the mail, I simply called him and said I had nothing to add or subtract.

I was not surprised when he gained admission to the University of North Carolina, Charlotte, to study for a Master of Science in Electrical Engineering.

Andrew and I had so much respect for each other that our relationship appeared rather too formal. I will not pretend to have been part of his inner circles. Apart from occasional greetings on WhatsApp and our frequent meetings on Facebook, I didnâ€™t know much about the details of Andyâ€™s programme and how he was faring. It was partly because of his modesty. Andy would not say he was flying even if thatâ€™s what he was doing.

But he didnâ€™t have to trumpet his success. Success would trumpet him. It would eventually be known to many outside his inner circles.

The Director of Graduate Programmes at the Department of Electrical and Computer Engineering at the University of North Carolina at Charlotte, Dr Valentina Cecchi, described Andrew as â€œextremely successful.â€ She said Andy was â€œtop of the class in all his graduate courses.â€

Graduating with a GPA of 4.0, Andrew was inducted into The Honour Society of Phi Kappa Phi, the United Statesâ€™ â€œoldest and most selective all-discipline collegiate honour society.â€

It was his selection as the commencement speaker, representing the graduate school, that caught the attention of Andyâ€™s family, friends and even those who did not know him back home.

Those of us who knew Andrew celebrated him on Facebook. Some online news portals did stories from a Facebook post about Andrewâ€™s brilliance written by JoyNewsâ€™ anchor, Israel Laryea. A flood of congratulatory messages from young Ghanaians who were inspired by Andyâ€™s exploits followed. Some were awed, but to those who knew Andy, it was an expected progression from a young man who held so much promise for himself, his family, Ghana and humanity.

I donâ€™t recall my first encounter with Andrew Mbabilla Amuna, but it must have been in his house. His father, William Amuna, and I were good friends. And we bonded so well that our two families soon got drafted into it.

It was Ezeulu, the main character in Chinua Achebeâ€™s Arrow of God, who observed that â€œeven a hostile clansman was a friend in a strange countryâ€

Neither William Amuna, a renowned Ghanaian engineer nor I could be considered hostile a clansman. At least, not towards each other. And we were not in a strange country. But we were both from Bongo, one of the poorest districts in the northmost part of Ghana. Our shared heritage, when we met about 800 kilometres from home, cemented that friendship until my father visited Accra.

When the Awunis visited the Amunas, there was an agreement to visit Andyâ€™s paternal grandmother. That visit resulted in a historical DNA conducted by my father and William Amunaâ€™s mother. We were not just friends from the same district. Our grandparents were related by blood.

That complex web of the external family is not easy for us the young ones to remember, so I have since come to regard Mr Amuna as an uncle and Andy as a cousin. Even if, in the strictest sense of the relationship, that might be exactly the case, our bond was stronger than friendship.

Andy was present at my wedding. He came home with his mother and father when my wife was called to the bar and we invited a very few family members and friends to the house for a get-together. My wife and I were regular visitors to the Amunas, and of the three children, Andrew was the one we were closest to.

Fred has been in the US for a long time and we met only once. Mbora, the youngest of the three boys, did not take much interest in our conversations, which did not often stray too far from the woes of our country. Mbora participated when we talked about the English Premier League and almost monopolised the conversation whenever Liverpool FC was mentioned. Otherwise, he would flash the signature smile of the Amuna children and mind his business, which did not seem to include Ghana.

Andrew was one of two friends whose deaths hit me extremely hard. The other was Komla Dumor, who had been Andrewâ€™s fatherâ€™s classmate in Havard.

When he delivered the commencement speech on behalf of the graduate school at his graduation, Andrew had said, â€œLife does not always go as planned, we would have to adapt.â€

Anyone who listened to that speech might have been thinking about the disappointments graduates face after leaving school. It was going impossible to imagine that the young man who epitomised the hope and trust in his generation would not live to celebrate the first anniversary of his graduation.

In these circumstances, however, the Amuna family has something to console them. Andrewâ€™s life was short, but it was certainly long enough to touch generations before and after him. It was long enough to reach people farther than he had physically reached.

Andrew lived his life in such a way that writers of his tributes do not have to lie. I have had the opportunity to work on the tributes and I have read all of them, including the 50 tributes that came from the company he worked in the US. Three themes stood out in all the tributes.

The first one is that Andrew spoke the universal language of peace and harmony. That language is his perpetual smile. Anyone who knows their mother will not doubt where the children inherited their smile. Even if you spoke to Genevieve Amuna on the phone, you would â€œseeâ€ her smile.

Andrew always wore a smile. If he was not smiling, he was attentively listening to you as you spoke. And you could be sure that smile would break out on that handsome face before he said goodbye. About 98% of the tributes talked about his smiles.

Another major theme that also runs through Andrewâ€™s tributes is his compassion. His schoolmates say while outside in the US, he was the first to contribute whenever someone needed to be helped. Andrew was sending contributions for payments for brilliant but needy students in the BONABOTO area of the Upper East Region.

Some years ago, I visited the Bongo District Hospital and reported how children and adult females shared the same ward. The beds were obviously not adequate, so up to three children were sometimes put in the same bed, while some slept on the floor. Andrewâ€™s father mobilised his siblings and friends and they built and furnished an 80-bed childrenâ€™s ward for the hospital in Bongo. It later emerged that Andrew was the one who first read my report online and called to suggest to his father that something should be done about it.

A tribute by Nelly Martinson, Customer Service Representative at SEL, mentioned the high opinions the writerâ€™s friends held about Andrew. â€œIn the words of one of such friends when she thought of Andrew, she immediately thought of a future president of Ghana.â€

The tribute from Achimota School Science 3 Class to which Andrew belong said this about Andrew:

â€œHis passionate contributions to discussions about the problems in our country and the innovative solutions he suggested made us give him the moniker, â€œMr President â€ and we truly did believe he could become a very good president if he wanted to.â€

Five other tributes mentioned Andrewâ€™s leadership skills and the fact that they believed he would grow up to be the leader Ghana needed to get out of its hopelessness.

Ghana and humanity have been denied more of what Andrew had to offer. His life has ended but his legacy lives on.

With the Andrew Mbabila Amuna Foundation that has been established in his memory, his legacy and what he stands for will not die.

Rest in peace, Mbabi. May God grant your parents and family the strength to cope with this loss. f

And may those signature smiles return to the faces of your family, especially your motherâ€™s face.