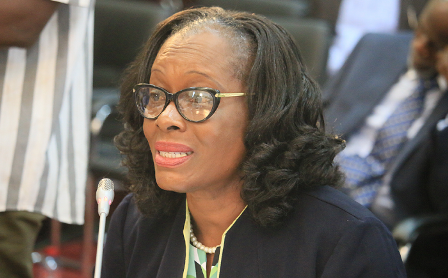 I have read with shock a press statement from the Ministry of Justice and Attorney-General, describing my story on the missing CHRAJ report as false.

The story stated that an investigative report on Zoomlion conducted by the Commission Human Rights and Administrative Justice (CHRAJ) could not be found at the Ministry of Justice and Attorney General, even though CHRAJ said it submitted it.

I did that story with the highest journalistic standards possible and this charge against me cannot be sustained. The Ministry of Justice and Attorney-General’s explanation that the case name I brought to department was not the same as the one on the cover letter is false and I will prove that with the following facts:

The CHRAJ investigation into alleged acts of corruption by Zoomlion and the District Assemblies Common Fund against the state started in 2009, but it came to my attention in 2017 when I was investigating fraudulent sanitation contracts awarded to Zoomlion and the Jospong Group.

I went to speak to the Commissioner of CHRAJ, Mr. Joseph Whittal, and he granted me and interview. He confirmed the said investigation and added that CHRAJ was almost done and would submit the report to the Minister of Justice and Attorney-General when it completed the investigation. This was in June 2017. I made a number of follow-up visits to CHRAJ to ascertain the progress of the report until I was told that it had been submitted to the Attorney-General in June 2018.

The first time I spoke to the Minister of Justice and Attorney-General, Gloria Akufo, about the corruption investigations conducted by CHRAJ into the activities of Zoomlion, I did that in person. In the presence of A-G was her personal assistant (PA).

The A-G told me right away that such report had not come to her attention after I had explained the nature of it. I was shocked because this was an important report from the Head of CHRAJ to her so it sounded unusual that after describing the nature of the report, she still did not seem to be aware of its existence.

The A-G then requested that, in order to help her conduct a search in her department to ascertain whether the report had been submitted to her office, I should try and get her the exact title of the investigation.

On October 31, 2018, as she directed, I sent the information on the cover page of the CHRAJ Report by email to her personal assistant. She said a search had been conducted in the A-G’s department. (I have been dealing mostly with her PA since 2017 on officials matters and have always had responses and confirmation when I met the A-G in person so I have no reason to doubt her PA in this case.)

On November 17, 2018, the Attorney-General’s PA sent me the following message on WhatsApp at 8:47 A.M: “Good morning. Hope you are well. Our records do not show that we have received the report from CHRAJ”.

On January 8, 2019, at 06:32 A.M, I sent the cover letter to the Attorney-General’s personal assistant with the following message. “CHRAJ insists it presented the report to the AG. With this letter.” The Attorney General’s Personal Assistant responded as follows: “But we clint [sic] trace it. Thank u. Will have them check the records again.”

On 13, May 2019, I called the Attorney-General for a follow up, but she said she was in a meeting. I then sent her the following message through both WhatsApp and SMS: “Good morning, Madam. I wish to meet you to discuss updates on the Jospong investigation, the CHRAJ Report on Zoomlion submitted to your ministry and your advice to the Youth Employment Agency on the Zoomlion contract. I’m doing follow up stories on these and will want to clarify some issues with you first. Thank you very much.”

I forwarded the same message to her PA. I did not get a response from either the Attorney-General or her PA. So on May 14, I sent another message to her PA reminding her of my unanswered request. She responded at 17:37 with the following: “Good evening. Sorry for the late response. Can you please assist with the issues you need clarification on?”

I stated specific issues with the three topics separately. On the topic of the Fumigation investigation, the A-G’s PA responded at 17:46 with the following message to me on Whatsapp: “ She advises that you speak with the DPP [Director of Public Prosecution].”

On the CHRAJ report, I explained exactly what I wanted from the A-G: “CHRAJ insists it submitted the investigative report on Zoomlion in June 2018. Does the A-G department still hold the position that the report cannot be traced?”

I went to see the DPP on the fumigation case, but I did not receive a response on the GYEEDA and CHRAJ Report. On the CHRAJ, however, I had received three separate responses from the Attorney-General and her PA to the effect that they did not know the whereabouts of the report. So I filed the story on June 3, 2019.

The Attorney-General’s Department said in its response to my story that it received two Whistleblower reports from CHRAJ in June 2018 and had assigned them to officials to work on them. It added that one of them was the CHRAJ report I was requesting. So even if I had not gone a step further to provide details on the specific report I was asking about, if I had just told the minister that I was following up on a “CHRAJ report on Zoomlion”, would it have been difficult to find out from the two reports received from CHRAJ to determine which one was on Zoomlion?

I narrowed the report down to CHRAJ. And I told her it was submitted in June. In June she received two reports from CHRAJ. How difficult was it to confirm from the two CHRAJ reports in her custody, whether one of them related to Zoomlion?

I left all these details out of the publication. I just wanted to stay on the salient issue. That is my style. I have the email trail and the Whatsapp and SMS messages as evidence. Besides, the purpose of the story was not to embarrass the minister. It was possible that someone in the ministry have “cleared” the report from the system, which is not rare in the civil and public service.

When we were on air, producers of the Joy FM Super Morning Show were communicating with top officials of the Attorney-General, who said they didn’t know about the report but would follow up. After midday, our sources told us the report had been found. So the A-G’s reaction was strange.

The response also created the impression that I had promised to assist the A-G’s department with information on the fumigation investigation, but did not do so. This issue is unrelated to the CHRAJ report and the story the A-G was reacting to, so I am surprised it was brought in. Here again, A-G has not been accurate in that assertion. Here are the facts:

At one of their retreats, Attorney-General told me she and the police CID were finding it difficult to get some important documents and information to proceed with the case so she called me to assist. It sounded ridiculous that state institutions with the power of the constitution could not get some information from state agencies and needed help from a journalist. But this is Ghana so I understood it.

I helped the A-G’s team to secure a number of important documents, including the existing fumigation contract documents for all the 216 assemblies at the time. Just last week, I went to present evidence of payment for these existing contracts to the Director of Public prosecution. In instances, I could not get the exact documents or information, I spoke to relevant state institutions and linked the A-G’s team up with people to get the needed information.

On Friday May 31, 2019, for instance, I went to the Attorney-General’s Department at 11 A.M. and worked until 4 P.M. My vehicle had broken down and I was feeling sick. (I’m sure the DPP and the Senior State Attorney, whom I worked with would have noticed fever blisters on my lips). But I still spent almost my entire working day assisting the A-G’s department for free.

For two years, I have sacrificed my time to assist the police and the A-G, including meetings on weekends. I happily paid for the fuel for those meetings and numerous rounds I made. I paid for printing and photocopies and spent sleepless nights, all for free to help the A-G to succeed. If she would not find it appropriate to acknowledge my sacrifices, she should not go further to suggest that I have been unhelpful despite promising to assist the team.

On whether or not there is enough evidence to go to court, I am prepared to prove to any team of lawyers that the A-G’ department has evidence enough to proceed to court with the fumigation case she mentioned and could have a 90% chance of success. Issues with Jospong and Zoomlion are beyond legal. It’s a political case and if the government is not bold enough to go to court with the fraud against the state, nobody should lie that there’s no enough evidence.

I find the Ministry of Justice and Attorney-General’s response and attack on my professional integrity unfortunate considering the lengths I went to before publishing this story. I did not rush to publish when the minister told me she did not know about the report.

I provided every needed information to make her response easier. What the ministry should have been telling Ghanaians in her response is what exactly it has done with the CHRAJ report on Zoomlion one year after it received it. I’m sure if the report had received any attention as the press statement claimed, the A-G would have mentioned at least one such action.

This unfortunate punctuation of an otherwise cordial working relationship notwithstanding, I’m prepared and available to assist the A-G’s team and the Police CID as I have done for the past two years. That is if heads of the Ministry of Justice and Attorney-General will understand the wisdom of our elders that the lion and the antelope have their differences but they have a common interesting that the forest that shelters does not burn. That forest is Ghana.