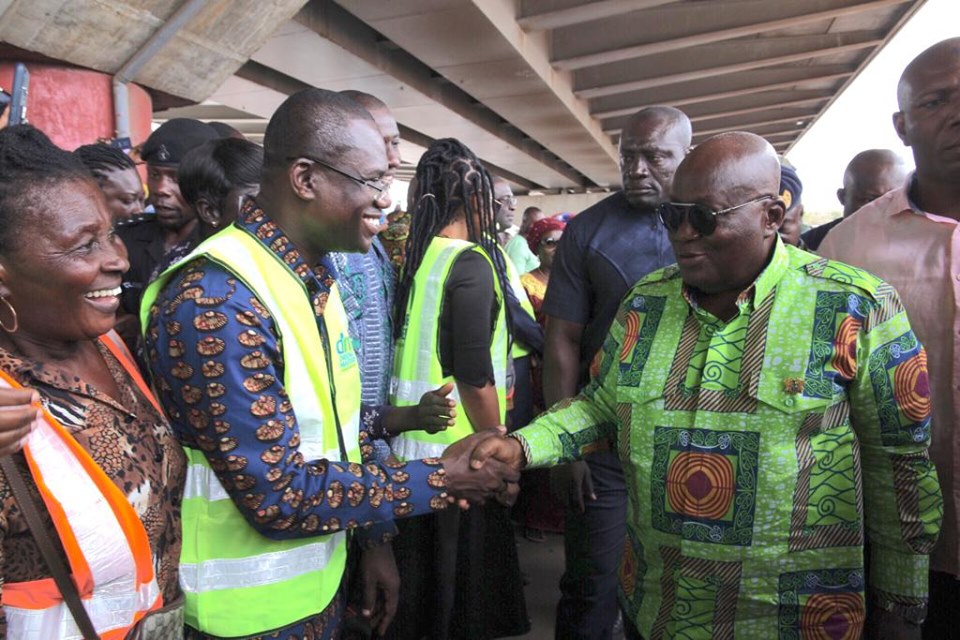 Dear Nana Addo Dankwa Akufo-Addo, It’s been a while since I last wrote to you. I know this letter, like the last one I wrote to you on the worsening security situation in Ghana, will not put a smile on your face. But that should not stop me from writing to you.

The frown on the face of a goat, our elders say, should not prevent its owner from dragging it to the Bolga market.

Like the proverbial goat, we own you. You are our president. You are our employee. We were sitting our somewhere when you came begging us to vote for you. In return, you promised to do our wish, to lead us to cure corruption and solve the problems facing us.

With our thumbs, we employed you and gave you a four-year contract. For this reason, you should be able to listen to our concerns even if they don’t please your ears. The man who makes his farm by a popular village path must not hate greetings.

Besides, I don’t want to believe you and your government are now allergic to criticisms because, in opposition, you encouraged us to hold the feet of the government to fire. I still remember the first time I met you in person. You may have forgotten, but I remember that day vividly.

It was in July 2016. It was an evening, in your office, near the British High Commission. I was launching my first book, Voice of Conscience, and was there to invite you to the launch. You were traveling out of the country, but you said you would get someone to represent you. The late Emmanuel Kyeremateng Agyarko represented you on the day. (To my shock, the extremely tolerant John Mahama also sent a representative.)

Before I broached the subject of the book launch, however, you made an important comment. I was under a serious attack by about half of the country because I had done a story about a certain John Mahama accepting a certain “gift” of Ford Expedition from a certain Burkinabe contractor. You encouraged me to keep up the good work, and as harsh and critical as my works and writings sometimes were, you believed people like me were needed to hold those of you in politics in check. You said the role of journalists like me was very critical to the sustenance of our democracy.

Mr. President, I am sure you still stand by these beliefs, for real values are like the spots of the leopard. If a powerful rainfall cannot wash away those spots, then power should not erode your values as a staunch believer in the rule of law and a champion of free speech. Of course, I don’t expect you to feel the same way you felt about my work in the past. Then, it was John Mahama. And our elders are right: if you see the corpse of an unknown person being carried away, it looks like a bundle of firewood.

The reason for this letter is that last week, I saw you again in the news with your friend, the CEO of Zoomlion and Chairman of the Jospong Group of companies, Joseph Siaw Agyepong. Yours is a mature brain so I’m sure you will look at the issues I’m about to raise. Some say I have a personal problem with the man when all I have written about him is his dubious business deals with Ghana, and never about his marriage or children. I’ve stopped writing about Roland Agambire and rLG because the government has discontinued its shady contracts with his companies.

Before 2013, I would have nominated Joseph Siaw Agyepong, a respected elder of the Church of Pentecost, for a Nobel Prize. After 2013, I found it difficult to classify him as a businessman. And that’s the reason, I felt uneasy when you gave him another photo opportunity in relation to yet another very disturbing government contract your government awarded to him.

Before I come to the contract in question, which made you visit Mr. Agyepong’s “business” twice in two years, let me remind you of what your own party, the World Bank, the Auditor General have said about Jospong. It’s not only Manasseh who has had issues with those deals.

In November 2016, three weeks before the general election that brought you and your party to power, your New Patriotic Party (NPP) held a press conference in Accra and described Zoomlion’s contract with the Youth Employment Agency as fraudulent. That Zoomlion’s contract came to your party’s attention because, in 2013, I investigated GYEEDA and revealed how dirty the deal was.

In 2013, the World Bank banned Zoomlion from bidding for any World Bank-funded project for two years. According to the World Bank, Zoomlion “paid bribes to facilitate contract execution and processing of invoices.”

In Ghana, however, no action was taken against Zoomlion even after the government set up a committee after my investigation and that committee found more evidence of fraud the company was committing against the state in the contract with the youth employment programme.

Again, in 2013, one of Elder Agyepong’s companies, Subah Infosolutions, was involved in the Subah Scandal. Almost every report of the Auditor General on the District Assemblies Common Fund for the past decade indicts Zoomlion in one way or the other.

Mr. Agyepong’s companies were again involved in the $74 million fraudulent contracts awarded to them with the help of Julius Debrah and Collins Dauda, Chief of Staff and Local Government Minister respectively. I revealed in my “Robbing the Assemblies” investigations that this contract was needless and had been inflated by over $31 million. I gave evidence of how a piece of bin liner sold to the general public by the Jospong Group for 98 pesewas, less than GHc1, but in the contract with the government, the Jospong Group quoted the price of a piece of bin liner as GHc67. The government was buying 900,000 pieces. do the math. (To your credit, the government discontinued this shady deal).

My investigation also showed evidence of multiple and fraudulent fumigation contracts involving Zoomlion and other Jospong companies at the Assemblies and the Ministry of Local Government and Rural Development. The police and the Attorney General have been handling this for the past two years. I hope they will one day finish and press charges.

The Auditor General recently announced it disallowed and surcharged more than GHc184 million paid to Zoomlion by the National Health Insurance Authority for yet another fumigation deal. This is what the NPP said about this contract in the November 2016 press conference addressed by the Policy Advisor of your party at the time, Boakye Agyarko:

“Zoomlion is also alleged to be involved with a bogus Malaria Control Programme with the NHIS, and has a preferential payment treatment over suppliers of services to the scheme, such as private medical practitioners/clinics and pharmacies. This year alone, Zoomlion is alleged to have been paid GH¢35 Million at the expense of providers of critical services to NHIS. No wonder the scheme has collapsed under John Mahama’s watch.”

“The Respondent upon a careful review of the documents tendered in support of the payments to the Appellant [Zoomlion] is of the candid opinion that the Appellant has at all material times, been fraudulent and has caused a drain on the scarce state resources.” Justice Georgina Mensah Datsa is expected to hear this case on May 30th.

Mr. President, the first time you visited Jospong companies and praised him, you came under wide condemnation. I wrote to you to be careful and distance yourself from companies that do not represent your anti-corruption brand. The old adage is still potent: show me your friend, and let me tell you your character.

People close to your office told me some compromised persons misled you to his companies. Our elders have taught us that the testicles of a wise man are not trampled upon twice. So I take it that this time, you knew where you were going.

Mr. President, I still would have had issues with this dredging contract even if it had been awarded to any other company apart from Jospong. I was furious when I read a month ago that the government had allocated GHc197 million for the dredging and desilting of storm drains to curb flooding.

Our drains are open and people throw all manner of things into it. Sand and plastics fill the storm drains so rainwater is not able to flow through them. This causes flooding in the national capital, especially the Odaw river/drain around the Kwame Nkrumah Circle area. Every raining season, we award contracts and spend money to clear the garbage from the drains. We could do two things to stop the perennial wastage of national resources on perennial flooding.

The first is to stop the choking of the drains in the first place. But it appears this is harder than rocket science, so I move on to the next idea, which is the application of common sense. And a bit of integrity.

To pay 197 million cedis to a company to remove sand and plastic from the gutters in a country where weak classroom blocks are killing school children does not make economic or any other sense under the sun. The company does this with equipment and tipper trucks and this work comes in the rainy season. The assemblies have or can employ the personnel to operate the equipment. This work can be done with very little or no cost at all to the state.

The scooping of sand from our gutters is not brain surgery, Mr. President. In 2015, Ibrahim Mahama’s company, Engineers and Planners, used equipment procured by the Ministry of Local Government and Rural Development to do this same work for free. Yes, it was for free. The government did not pay a pesewa.

Huge sums of money were spent in the past under the Korle Lagoon Restoration project, which had grand project designs. It amounted to nothing because no government wants to relocate the traders at Agbogloshie and Kokomba Yam Market and all the illegal settlers along the Odaw, who make nonsense of the interventions. So the contractors, like the weavers in The Emperor’s New Clothes, will get busy, take millions of cedis and finally give the same excuse we have had from both private and government agencies about the illegal traders and settlers.

When I did the GYEEDA scandal involving Zoomlion, the sector minister who was supposed to oversee the implementation of the scandal was Elvis Afriyie-Ankrah of the National Democratic Congress (NDC). I was not impressed with how he and his government dealt with the issues, and I wrote extensively about it. You and your party campaigned against them with those issues.

Last year, Mr. Afriyie-Ankrah said openly that ministers and governments signed stupid contracts not because they were stupid. He said the reason they did that and could not deal with corrupt companies was that the companies and business people involved in corruption were those that provided funding for politicians.

Mr. President, your association with and continued award of contracts to businesses with questionable integrity embolden them. It is as if the traffic indicator of your life signals right with your words, but you end up turning left with your actions. And that’s dangerous to your followers and appointees and the rest of the nation.

Sir, do something about it.

Manasseh Azure Awuni, a citizen, not a spectator.