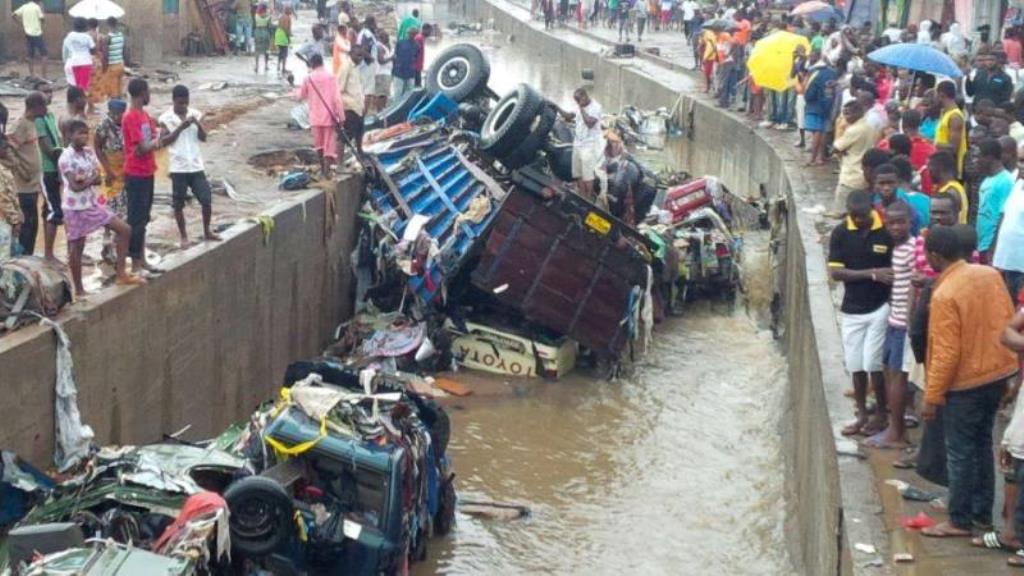 The National Disaster Management Organisation (NADMO) says five deaths have been confirmed after Accra got flooded on Sunday, April 7, 2019.

Parts of Accra got flooded, especially the Kwame Nkrumah Circle and its environs leaving most roads unusable.

Running water spilled from chocked drains unto the roads at the Kwame Nkrumah Interchange and left pedestrians with no choice but to walk through the water which was around the knee level.

The Greater Accra Regional Director of NADMO, Archibald Cobbinah in an interview with Starr news said 5 casualties were recorded after the flooding yesterday, which involved a woman and her child, two men and one other who was electrocuted. He added that there is a need for a drastic change in the habit of citizens who litter indiscriminately.

“5 persons died as a result of the rain and flooding. The way and manner in which we keep putting garbage in our gutters will not help us in any way at all. It is sad how people take advantage of the rains to collect and put rubbish on our drains,” he said.

He also stated that the police have conveyed the bodies to the morgue.

The Greater Accra Regional Director of NADMO, Archibald Cobbinah is calling for enforcement of the laws to “punish people who litter and throw rubbish in our drains.”

He added: “We all have a role to play to ensure we keep our cities and drainages clean. People should take precautionary measures to ensure they are safe during the rainy season. People should identify safe havens within their communities where they can be safe, especially when they know their houses or community floods when it rains.”

Meanwhile, the Ghana Meteorological Department has warned of heavy rains in the coming days as the rainy season sets in.