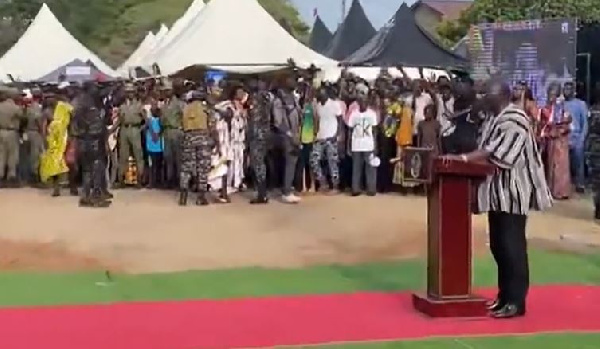 Vice President Dr Mahamudu Bawumia was booed when he was delivering a speech at the Hogbetsotso festival.

Bawumia however finished his keynote address amidst jeering from the crowd. He touted the importance of the Anlo state to the development of the country.

But the teeming crowd did not stay silent when he began to enumerate the government’s achievements despite the prevailing hardship.

The boos and chants of disapproval drowned the rest of his delivery as he shouted atop his voice.

While the noise grew louder, Dr Bawumia added that “there are many people who don’t like good news but this is good news.”

“Ghanaians are facing a major increase in the cost of living, cost of fuel prices and so on and we have to do more to make sure that we can relieve the burden of Ghanaians,” he added.

The booing of the vice president comes only weeks after President Nana Addo Dankwa Akufo-Addo was booed at two separate events within a spate of two weeks; the Global Citizens Concert at the Independence Square, and while he was driving through a town in the Eastern Region.

In the last few months, Ghanaians have been expressing their anger with the government’s handling of the economy, a situation that has plunged many sectors into disarray.