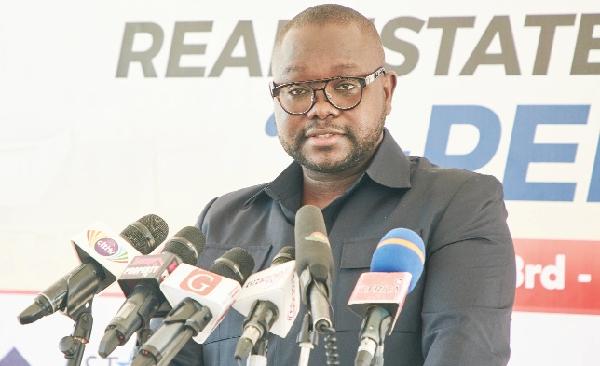 Cabinet has approved a policy for the establishment of the Ghana Housing Authority (GHA) to execute the country's public housing programmes.

Furthermore, the Ministry of Works and Housing is collaborating with the Ministry of Justice and Attorney-General’s Department to develop a framework to facilitate the establishment of the authority.

It is envisaged that the establishment of the GHA as an implementing agency will ensure the effective planning, management and development of the housing sector.
The Minister of Works and Housing, Francis Asenso-Boakye, who disclosed this in an interview with the Daily Graphic in Accra last Tuesday, explained that after the framework had been developed, it would be sent to Cabinet and then Parliament for approval, “so that we can have a very important institution to plan and manage housing development in our country".

He said stakeholder consultations and colloquium had been held, including a recent one in Kumasi, on the establishment of the GHA, with the view to shaping how the authority should be properly established.

“Over the years, one of the reasons our public housing programmes have lagged behind and failed is that we don't have an implementing agency whose responsibility is to manage housing developments in Ghana," Mr Asenso-Boakye said.

He said the management of housing programmes had been at the ministry level, even though the core functions of the ministry was to formulate policies and guide their implementation.

Citing the failure of the Saglemi housing project as an example, he explained that if there had been an implementing agency, feasibility studies would have been conducted to ascertain the viability of the project before construction.

“We wouldn't have had this fiasco with the Saglemi project if we had an institution whose duty it was to thoroughly assess its implementation,” he observed.

Touching on rental housing, the minister indicated that there were policies and laws that guided the rental market, and noted that the current Rent Act 1963 (Act 220) was being reviewed because it seemed to be outdated.

He said due to population growth, urbanisation and economic circumstances, it had become imperative to review the rent law to reflect the exigencies of the times.

Mr Asenso-Boakye referred to the huge gap between supply and demand in the housing sector, to the extent that there were few houses compared to demand for them.

That, he noted, had created the situation of which landlords had taken advantage to collect rent advance payments for up to three years from prospective tenants, although the rent law frowned on that.

He indicated that other processes had begun, with extensive stakeholder engagements being held across the country for the necessary inputs to be made for the review.

Mr Asenso-Boakye said his ministry was also working with the Ministry of Justice and Attorney-General's Department to ensure that the legislative processes involved in the review were properly done.

The minister expressed the hope that when the act was reviewed, it would address constraints in the rent regime and ultimately help provide a conducive environment for landlords and other developers to construct more housing units.

He said when Ghana's housing stock increased, customers and tenants would have choices and the gaps that existed between supply and demand in the housing sector would reduce to the barest minimum.

Expatiating on rental issues, Mr Asenso-Boakye revealed that although the Rent Department had been using “rudimentary methods" to collect data to process claims, the department was still able to settle rent issues.

He said his ministry was working with the Ministry of Finance to digitalise the operations of the department.

“The statistics are very impressive, and we are hopeful that once we are able to digitalise its operations, it will help fast-track the settlement of rent issues, and coupled with the new law, that will help a lot," he said.

The minister said the government was introducing a scheme known as the Rent Assistance Scheme to give loans to potential tenants at low interest rates for them to pay back in instalments.

That, he explained, was to help address the situation where tenants were not able to raise adequate funds to pay the advance rent charged by landlords.

He said the scheme was also expected to facilitate the acquisition of accommodation for fresh graduates who had secured jobs but might have difficulty raising advance rent to pay for their accommodation.

On sea defence projects, Mr Asenso-Boakye intimated that the Coastal Protection Programme had been investing heavily in that sector, with the hope of ensuring that violent and strong tidal waves did not continue to destroy people's properties and endanger lives along the coastal areas.

The execution of the sea defence project, he noted, would ultimately help enhance economic activities along the coast because people could take advantage and engage in fishing activities to earn incomes.

“Evidence shows that our beaches are quite narrow and tidal waves are usually very strong and violent, so they have been destroying lives and properties in the coastal areas. That is why the government is implementing this coastal protection programme with the provision of the sea defence project,” he stated.

Mr Asenso-Boakye revealed that the Nana Akufo-Addo government had so far invested about GH¢450 million to provide drainage infrastructure, including de-silting drainage channels.

He said while the government was providing such drains, it was equally important for Ghanaians to avoid indiscriminate dumping of refuse and plastic materials into the drains.

He called on residents of Accra not to build structures along water courses because no matter the amount of investment made in providing drains, if those practices were not stopped, they would eventually cause flooding.