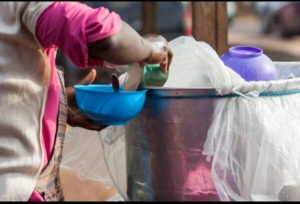 A private car crashed a 'Koko' seller to death at Adiebeba in Kumasi, Ashanti Region.

The 28-year-old 'Koko' seller called Swaba was going about her normal duty of selling but was crashed by a Hyundai Elantra which resulted in her death leaving one other person injured.

The incident occurred on Wednesday, April 1 and it forced residents to come out despite the lockdown directive.

A customer who survived the crash spoke to Luv FM and said:" I was buying the porridge when I saw the vehicle losing control and coming at top speed, it hit me and one other customer then crashed into the 'Koko' seller and she went under the vehicle".

The lady was rushed to the hospital but was pronounced dead a few minutes later.

The mother of the deceased says her daughter was her only hope because she is the breadwinner of the family.

The Police have commenced an investigation into the matter.

In March residents of Sawaba in Kumasi also witness another unfortunate incident when a school bus has run over a 4-year old girl killing her instantly.

Accidents have been rampant in Ghana and this has forced the Motor Traffic and Transport Department of the Ghana Police Service (MTTD) to deploy accident prevention squad to accident-prone areas to curb the menace following some fatal accidents in the country.

The latest accident which occurred on the Kintampo-Tamale highway on, March 9, 2020, claimed 30 lives with 27 of them burnt beyond recognition.