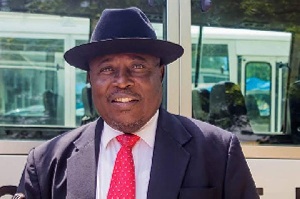 The group described Mr Amidu as petty and incompetent.

STRANEK had earlier petitioned Mr Amidu to invoke the jurisdiction of the Special Prosecutor to open investigations into alleged cases of corruption, nepotism, conflict of interest and a general lack of openness and transparency that has characterised the Agyapa Royalties deal of the ruling Government.

However, Mr Amidu replied the group and told them his office have already commenced an investigation into the matter.

He also said the group is seeking to take credit for processes already independently commenced by his office.

Mr Amidu called their petition as an opportunistic and populist move and this has not gone down well with STRANEK.

In a sharp reply, STRANEK said they "find it petty of a Special Prosecutor to describe a petition sent to you in good faith and in the interest of the people of Ghana as an opportunistic and populist enterprise."

They expressed disappointment in Mr Amidu's reply which he said he sees their petition as mere speculations.

STRANEK ended by saying that they remain resolute in the face of Mr Amidu's unwarranted attack.

Below is the STRANEK reply

RE: PETITION FOR THE INVESTIGATION OF THE AGYAPA ROYALTIES DEAL

We acknowledge receipt of your letter dated September 22, 2020, with reference number, OSP/SCR/2C/46/20 on the above captioned matter via media.

We would like to thank you for bringing to our notice that your office has started investigations into the Agyapa deal and that you have written to Parliament to furnish you with relevant documents.

We, at STRANEK-AFRICA, find it petty of a Special Prosecutor to describe a petition sent to you in good faith and in the interest of the people of Ghana as an opportunistic and populist enterprise.

It is difficult to understand the depth of your anger at an organisation petitioning your office to investigate what seems to be a deal fraught with illegality, secrecy and conflict of interest issues. If nothing at all, our petition should give you a sense of direction as to the kind of questions that Ghanaians want answers to.

Your description of our letter as containing mere 'speculations without more' leads us to believe that you have pre judged the matter or that you have pre conceived notions prior to the conclusion of your investigative process. That is very disappointing for someone occupying your honourable office and raises major issues about your fitness to investigate the matter at hand.

It is our duty as citizens of Ghana to assist in fighting corruption and protecting the public purse.

STRANEK-Africa is not in any form of competition with you to “take credit for” any processes as childishly captured in your response, neither do we intend to start one. We will continue to go high when you go low. The fight against corruption cannot be a one-man affair. It requires a collective effort.

As a public accountability civil society organization, we remain resolute in the face of your unwarranted attack. Kindly be reminded, that we are all involved in building our nation.

Yours in the interest of the nation,