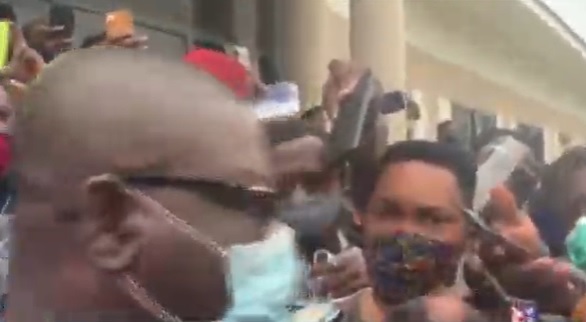 There was chaos at Tema Port as some security officials disrupted a meeting between freight forwarders and some officials of the National Democratic Congress (NDC).

This was after security officials said the NDC did not have any authorization to hold such a meeting in their long room.

The purpose of the meeting was to discuss how the implementation of the Integrated UNIPASS system is having on businesses at the port.

The officials of the NDC were former Trade Minister Dr Ekow Spio-Gabrah and Isaac Adongo member if the Finance Committee led the meeting.

After the chaos, Isaac Adongo asked the freight forwarders to fight for their rights if they know that the UNIPASS system is not working in their favour.

The Ghana Revenue Authority (GRA) has begun using the newly Integrated UNIPASS system at the Tema Port and other entry points. This is in spite of the strong opposition against the new platform by some stakeholders in the import and export business as well as some civil society groups.

UNIPASS system is an e-Customs system introduced by the government to provides swift customs clearance, seal the leaking revenue basket and facilitate trade at the country’s ports.

The system was developed by the Customs UNIPASS International Agency (CUPIA) of South Korea. It comes to replace an older system which was run collectively by Ghana Community Network Services (GCNet) and Customs World of Dubai (formerly known as West Blue).

Following its digital nature, the UNIPASS system fits perfectly into the digitization agenda and paperless system the government intends for the economy.

A freight forwarder, forwarder, or forwarding agent, also known as a non-vessel operating common carrier (NVOCC), is a person or company that organizes shipments for individuals or corporations to get goods from the manufacturer or producer to a market, customer or final point of distribution.