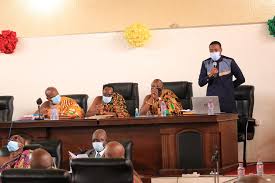 The Volta Regional House of Chiefs is calling for an independent investigation into the Western Togoland secessionist group revolt on Friday.

A statement signed by the Vice President of the House, Togbe Tepre Hodo IV said "The Standing Cornrnittee of the Volta Region House of Chiefs held an emergency meeting on Sunday the 27th day of September,2A20, to discuss the rebellious actions, allegedly carried out by a secessionist group called "Western Togoland Group", at various locations in the Volta Region in the early morning of Friday, 25e September 2020."

The statement outlined some of the issues discussed at the meeting.

The Volta Region House of Chiefs roundly condemned the attack by the purported "Western Togoland Group" in no uncertain terms.

These were criminal actions, which should be investigated and those involved be made to face the full rigours of the law.

The Volta Region House of Chiefs would like to state clearly their commitment to one peaceful and united Ghana, and their preparedness to collaborate with government to ensure peace and stability in the Volta Region and the country at large.