Continue your propaganda, the reality will expose you- Mahama to NPP 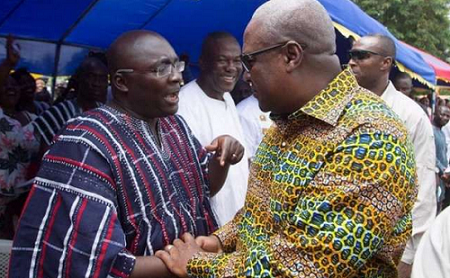 Former President John Mahama says the New Patriotic Patriotic Party (NPP) can continue to do propaganda but they will be exposed by the reality of the lives of Ghanaians.

This comes on the back of the NPP holding a town hall meeting in Accra on Wednesday, April 3, 2019, led by Vice President Dr Mahamudu Bawumia to address issues regarding the economy.

Dr Bawumia gave reasons for the much talked about cedi depreciation and also said the worse performance of the cedi under their tenure is better than its best performance under the NDC.

The NDC on April 4, 2019, also held a public lecture on Ghana’ economy and former President Mahama in his address said the government will be exposed by the reality of the lives of Ghanaians if they continue with their propaganda.

"So in putting out your communication as a public relationist, you try to present the institution or person in the best possible light and you might sometimes be selective and present only the best things and hide the negatives but our lecturers always reminded us that 'beware with your reality and keep your PR as close to your reality as possible"

This statement seems to be a rebuttal of Bawaumia's comment on the economy prior to the 2016 general elections.

He said: "When the fundamentals are weak, the exchange rate will expose you".

Dr Bawumia when asked if the recent cedi depreciation is as a result of the fundamentals been weak declined and said the economy is still in good shape.