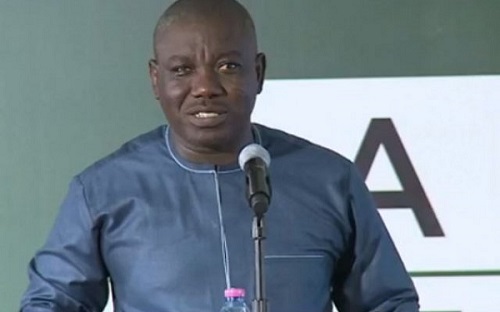 Isaac Adongo Member of Parliament (MP) for Bolgatanga Central says Ghana is no longer attractive to foreign investors and risk dropping out of the top 10 investment destinations in Africa due to the poor policies of the government.

Mr Adongo who was speaking at a public lecture on Ghana’ economy in Accra on Thursday, 4 April 2019, said Ghana has already dropped in the latest ranking of investment destinations in Africa as released by Rand Merchant Bank (RMB) of South Africa.

The NDC MP comparing the current ranking to what Ghana recorded under the of former President John Dramani Mahama, blamed the New Patriotic Party (NPP) government for retarding growth in the economic environment.

“During the tireless efforts of His Excellency John Dramani Mahama the least we ever got was a fourth and by 2018 it came to fifth. Your Excellency, at some point in time we were third on the list for destination of investing in Africa and due to your tireless effort to improve the economic environment by leveraging our resources to improve our infrastructure and improve competitiveness, Ghana was seen as a safe haven for investment. Today, as we speak, we have declined from the fifth to the ninth, we are at risk of falling out of the top 10 investment destinations in Africa.”

He also criticized Vice President Dr Mahamudu Bawumia for singing “this kind of disgrace” instead of focusing on policies to reverse the trend.

He stressed that RMB indicated that “efficient infrastructure is the backbone for leveraging investment and for creating sustainable opportunities for the people”, a policy which former President Mahama pursued but “was laughed at”.

He believes that former President Mahama has been vindicated by the findings of RMB.

He compared Ghana to neighbouring countries like Cote d'Ivoire and said they are improving in terms of economic and business environment but Ghana has stagnated.