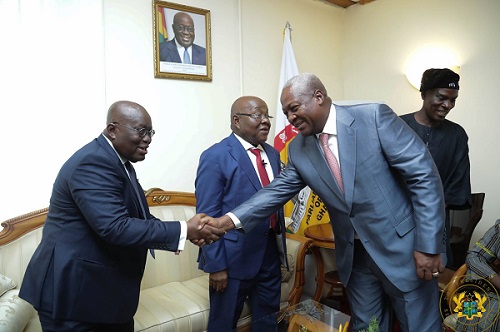 Member of Parliament for Bolgatanga Central, Isaac Adongo says President Akufo-Addo is trying hard to match former President John Mahama's record but is unable to do so.

Mr Adongo who was speaking at a public lecture on Ghana’ economy in Accra on Thursday, 4 April 2019, says the records  Ex-President Mahama has set are not being matched by President Akufo-Addo and his NPP government.

He further stated that the NPP government managing the economy are “ineffective and inefficient”.

He said: “Your Excellency [referring to Mahama], your track record has become an albatross on the neck of the NPP. As hard as they try, they are unable to match that track record.”

Mr Adongo also reacted to Vice-President Dr Mahamudu Bawumia’s presentation at a town hall meeting in Accra on 3 April 2019 where he assured Ghanaians that the strong macro and microeconomic fundamentals arising from innovative policies and programmes implemented by the government over the last two years have placed Ghana in a strong economic position and made the future very promising.

Mahama assumed office as President in 2012 after winning the general elections but the NPP led by President Akufo-Addo kicked out Mahama and the NDC in 2016.

Isaac Adongo also said Ghana is no longer attractive to foreign investors and risk dropping out of the top 10 investment destinations in Africa due to the poor policies of the government.

The NDC MP comparing the current ranking to what Ghana recorded under the of former President John Dramani Mahama, blamed the New Patriotic Party (NPP) government for retarding growth in the economic environment.