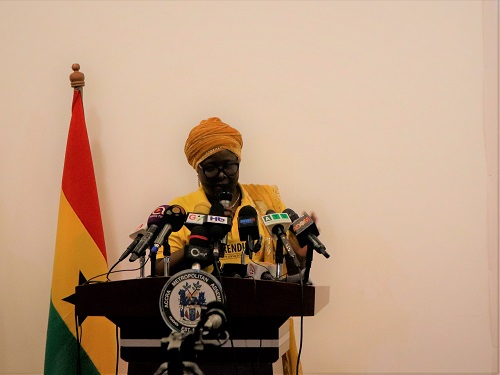 The Minister for Local Government and Rural Development, Hajia Alima Mahama, who doubles as Member of Parliament (MP) for Nalerigu/Gambaga in the Northern Region says President Akufo-Addo remains committed to his manifesto promise of ensuring the election of Metropolitan, Municipal and District Chief Executives (MMDCEs), to boost development in local areas.

Speaking at the national launch of the Citizen’s Education and Awareness Raising Campaign on the Upcoming District Level Elections and Referendum on September 18, 2019, the Minister said: “On winning power, the President at the MMDCEs orientation in July 2017 indicated that these were the last set of MMDCEs that would be appointed, and that he was going to ensure that we went through the processes towards the election of MMDCEs.”

She made the point that President Akufo-Addo’s conviction that allowing the populace to elect their local government representatives is shared by other political parties, as well as Civil Society Organizations (CSOs). She said: “We all recall that in our party manifestoes three parties indicated clearly that if they won they would ensure the election of MMDCEs; NPP, NDC, PPP.”

Hajia Alima Mahama also stated that there is enough evidence through research and consultative engagements with the larger Ghanaian public to indicate that majority of the people want to elect their MMDCEs, rather than have them appointed by a government, which is itself elected.

“We are also aware they’ve indicated it today, that there’ve been a number of researches and the researches indicate that 70% of Ghanaians want to see their MMDCEs elected. In fact, the Constitutional Review Commission indicated that since the introduction of the 1992 Constitution, there have been incessant calls for a change in the manner of appointing MMDCEs which in the opinion of many Ghanaians is undemocratic. It was argued that it is undemocratic to superimpose a national government structure that is contested on political party lines over a local government system that is nonpartisan. And this was the Constitutional Review Commission’s Report. And as I indicated NCCE also in 2015 did a survey and 70% of Ghanaians said they wanted to see their MMDCEs elected.”

Hajia Alima Mahama, who believes the election of MMDCEs on partisan basis will be a key solution to the ‘winner takes all’ syndrome plaguing Ghana’s democratic environment, has been embarking on a nationwide campaign to sensitize Ghanaians on the need to elect MMDCEs for better governance and development, ahead of a referendum scheduled to take place on December 17, 2019.

The referendum is the only means of amending article 55(3) of the 1992 constitution, which is an entrenched article.

The article states that, “subject to the provisions of this article, a political party is free to participate in shaping the political will of the people, to disseminate information on political ideas, social and economic programmes of a national character; and sponsor candidates for election to any public office other than to the District Assemblies or lower local government units.”

Hence, the need for a nationwide campaign to educate and convince people to vote ‘YES’ in the referendum.

READ ALSO:  Referendum on election of MMDCEs fixed for Dec. 17