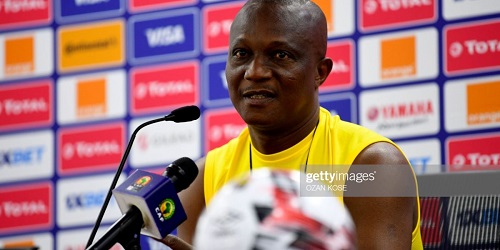 Kwesi Appiah has revealed his team talk to the Black Stars players before their win against South Africa in the AFCON 2021 qualifying campaign.

Appiah's Black Stars beat South Africa 2-0 at the Cape Coast Stadium in the opening game for the AFCON 2021 qualifiers.

Goals from Thomas Partey and Kudus Mohammed either side of the half sealed the win for Ghana.

Speaking after the match, Kwesi Appiah said he told his boys to go all out and justify why they deserved to wear the national colours.

"That was the message given to them anyway to go out there and prove to Ghanaians that they all deserved to be in the national team. I think the performance was very impressive. Our plan was to have the ball so that we could tactically play how we wanted.”

Appiah also shed light on his decision to play Sassuolo midfielder Alfred Duncan on the left-wing, one which seemingly did not help the player’s performance.

“We had a lot of injuries and for that reason, there were some players that I had to shift players around. Duncan does very well in his club; sometimes he plays from the right, sometimes midfield,"  Appiah explained.

"I thought I need the experienced players in the middle. I believe with their experience and energy, they can always keep the ball. I had Dede, Duncan, Partey and Baba which made our midfield very strong."

Ghana is now tied on points after matchday 1 with Sudan who also recorded a win over Sao Tome and Principe.

The Black Stars next match is against Sao Tome and Principe on November 18.