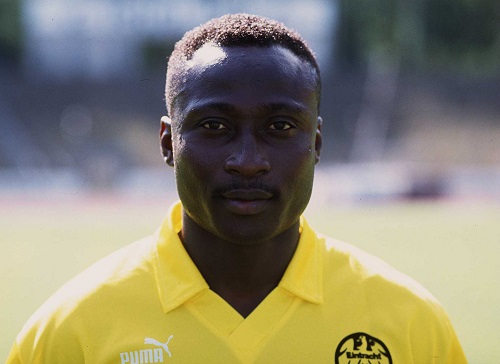 Ex-Ghana forward Anthony Yeboah has revealed why the Black Stars were not able to lift the AFCON 1992 trophy.

According to the 53, disunity in camp shattered Ghana's dream of adding to her four AFCON trophies.

Ghana suffered a painful defeat to Elephants of Cote d’ Ivoire in the finals after a penalty marathon.

Recounting on the bitter experience after 28 years, the ex-Leeds United and Hamburger SV striker believed they should have been AFCON champions but disunity in camp was a factor in their failure to annex Ghana's fifth title.

“We realized we made a lot of mistakes, we were supposed to win the tournament totally because we were much better than the others,” he told to GTV Sports plus.

“Just petty things we couldn’t do right cost us that trophy but the team we had at that time was fantastic.

“There was also a little bit of misunderstanding in the team.

“Yes it is true (That the team was split) because you could see from some of the players. For example when we meet or when we sit together as a group you could see the Kumasi people sitting at a particular place and the Accra people also sitting at a particular place, we didn’t have problem against each other but as I was saying there was some misunderstanding. The teamwork wasn’t like it supposed to be so I think that cost us a lot.”

He also added that the suspension of their captain and talisman Abedi Pele was a huge blow to the team.