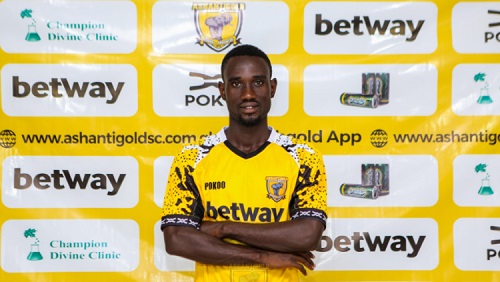 Speaking to Otec FM, he said, “There is no truth in those speculations, I still have a contract with Ashantigold, which I was informed by the club to come and do my COVID-19 test, so I was really surprised when I heard the news in the media”

“The team manager denied and told me that I wouldn’t have been called for the COVID-19 test if I’ve been released as being reported in the media. As we speak, I’m in Obuasi preparing for training” he concluded.

The midfielder who is the younger brother of Ghana international defender Jerry Akaminko has disclosed that he is ready to wear the Porcupines jersey.

Speaking to Kumasi FM, the 24-year-old who featured 12 times season for the Miners in the just truncated 2019/20 Ghana Premier League season shared that his relationship with the Obuasi-based club has ended after both parties failed to reach a consensus on a new deal.

He indicated that would jump on an offer to play for Asante Kotoko if they come calling.

“I’m no more a player of Ashantigold. My contract expired at Ashantigold right after the league was cancelled,” he told Kumasi FM.

“The management asked if I’m available and would like to continue with them but they have failed to reach my manager after I gave them the nod to talk to him.”

“I’ve not spoken to coach Maxwell Konadu yet. He spoke to me when I was contracted to Ashgold for a possible transfer to Kotoko, he told me he spoke to the management and it was positive but I’ve not heard from him since.”

“I’m yet to hear from him, but I’m willing to play for Kotoko, it will be an honour for a ‘whole’ Kotoko to approach me. I will thank God if I receive a call from Kotoko asking for my services.”

“My regards to all Kotoko fans, ‘Asanteeeeeeeeeeee’,” he shouted”