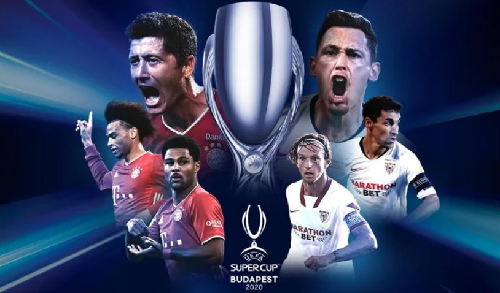 The 2020 UEFA Super Cup is set for tonight as Bayern Munich face Sevilla at the Puskas Arena in Hungary.

The Bavarians captured the Champions League in truly dominant fashion, winning every single game en route to a 1-0 win in Lisbon that completed their second historic treble.

Though the Super Cup usually takes place before the domestic seasons, this one is taking place after both the Bundesliga and La Liga have begun their 2020-21 campaigns due to scheduling conflicts brought on by the coronavirus pandemic.

The teams have met just once in UEFA competition, in the 2017/18 UEFA Champions League quarter-finals.

Bayern enter the fixture on an incredible run of form and are favourites to overcome Sevilla, who are competing in this showpiece fixture for the fourth time in six years.

UEFA announced early this month that fans will be allowed to attend the Super Cup in Budapest. According to the European football governing body 30 per cent of the 67,215 capacity Puskas Arena in the Hungarian capital will be taken by fans.