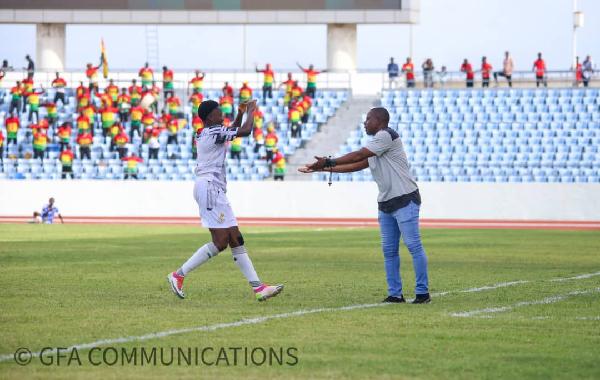 The Black Maidens of Ghana have completed the double to kick Guinea out of the World Cup qualifiers for India 2022.

The Black Maidens on Saturday displayed a spirited performance thumping their opponents 7-0 at the Cape Coast Stadium.

This comes after recording a 3-1 victory a weeks ago against Guinea in Conakry thus qualifying to the final round on a 10-1 aggregate where they will take on Morocco.

The winner over two legs will book a place at India 2022.

The Black Maidens started brightly when Nancy Amoah’s corner in the 12th minute landed on the blind side of the goalkeeper to make it 1-0 to Ghana.

The second game came in the 18th minute when captain Georgina Ayisha Aoyem made it 2-0.

The 3rd came in the 29th minute when Nancy Amoah scored a similar goal to his first, another ‘corner to goal’.

The Black Maidens went into the break with that 3-0 lead and after the recess, they made it 4-0 in the 49th minute.

The Maidens did not relax as they went in search of more goals and Mary Amponsah made it 5-0 with a sweet strike in the 53rd minute.

Constance Agyemang’s effort in the 70th minute made it 6-0 and a 7th followed later as the game ended.