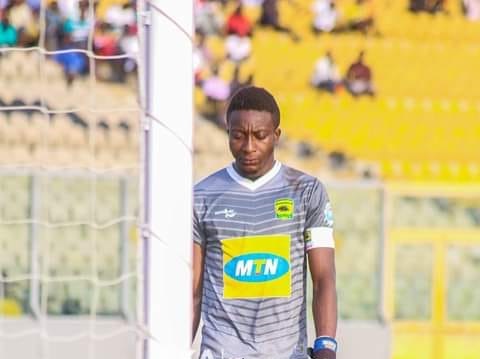 Felix Annan who doubles as the goalkeeper and skipper of Asante Kotoko has insisted that his outfit has moved on from the Etoile du Sahel defeat.

The Porcupine Warriors campaign in the 2019/20 CAF Champions League ended on a sad note after they were booted out of the competition by the Tunisia giants on a 3-2 aggregate.

Their elimination has seen them demoted to the second tier to the CAF Interclub competition - Confederation Cup where they have been pitted against San Pedro of Cote d'Ivoire.

Speaking ahead of San Pedro clash, Felix Annan says the squad is ready to appease their faithfuls by going far in the Confederation Cup.

"We were more than disappointed when we couldn't go far in the CAF Champions league, because we really wanted to make our fans proud," he told Asempa FM.

"However, we have moved on and we ready to do our best in the Confederations Cup."

"I have so much believe in our squad and I know we can improve on our performance going forward."

The Porcupines will be hosting the Ivorian side in the first leg to be played at the Baba Yara Sports Stadium on October 27 while the return leg comes off a week later in Abidjan.

Winner of this playoff after two legs will automatically progress to the group stage of the 2019/20 CAF Confederation Cup.

The Confederation of African Football (CAF) has tasked South African referees with the duty of overseeing the CAF Confederation Cup playoff between Asante Kotoko and San Pedro at the Baba Yara Stadium.

South African referee Eugene Nkosinathi has been charged to officiate the first leg which comes off on Sunday, as he will be assisted by compatriots Athenkosi Ndongeni and Elphas Sitole as line one and two respectively.