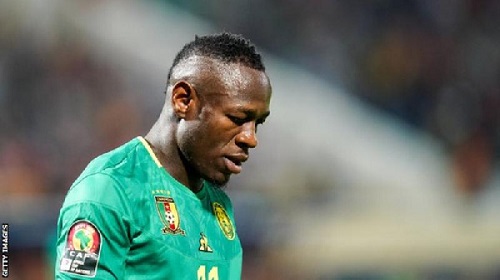 Cameroon attacker Christian Bassogog has announced he will donate 10m CFA Francs ($16,000 or £13,000) to Cameroonian students living in areas of China stricken by the deadly coronavirus.

The 24-year-old, who joined the Chinese Super League club Henan Jianye in 2017, is currently in Yaounde while football is suspended in China due to the virus.

Cameroon's embassy in China says there are close to 300 Cameroonians, mainly students, living in Hubei Province, considered the epicentre of the coronavirus epidemic.

Of those around 200 are currently in the city of Wuhan which has been under quarantine since 23 January.

"China has a special place in my heart and that's where I ply my trade," Bassogog said after meeting with Cameroon's Minister delegate of External relations.

"This money is aimed at helping Cameroonian nationals living in China especially the students.

"It's important that we come together in such periods and show such support and love to the needy.

"We want more Cameroonians across the world to reach out and support not just their country men but also China as a nation."

His donation comes after the central African nation's president Paul Biya ordered for 50m CFA Francs ($82000 or £65,000) to be made available to the country's embassy in Beijing, to provide assistance to Cameroonians living in the affected areas.

Bassogog, who burst into recognition after being named the Player of the Tournament at the 2017 Africa Cup of Nations as Cameroon won the title, says he hopes his donation can spur more Cameroonian athletes to pay attention to the medical crisis in China.

Earlier this month, a Cameroonian student Kem Senou Pavel Daryl, was discovered to have contracted the disease in Zhengzhou, Henan province.

After two weeks of treatment, the 21-year-old showed no trace of the ailment, becoming the first African person known to be infected with the deadly coronavirus and the first to recover.

In today’s profiling, our focus is on the Head Coach of the Ghana Under-20s,…

Covid-19: Gov't may announce restrictions in some parts of the country - Oppong Nkrumah

Kojo Oppong Nkrumah, Minister for Information says the government may resort to…

We are dealing with an invincible enemy and are completely helpless - Dep. Health Minister

President Akufo-Addo has announced restrictions in certain parts of Greater…

Ghana Premier League side King Faisal have announced the signing of…