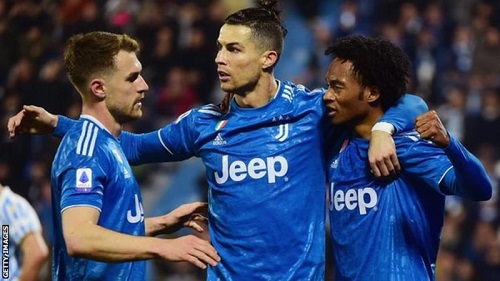 Five Serie A matches will be played behind closed doors this weekend - including Juventus' match at home to Inter Milan - because of coronavirus.

Matches at Udinese, AC Milan, Parma and Sassuolo will take place without fans.

Games at Lazio, Napoli, Lecce and Cagliari will go ahead with supporters as normal, but Sampdoria's match on Monday is yet to be decided upon.

Italy has put towns in northern Italy into lockdown after 229 people tested positive and seven died.

Inter's Europa League last-32 home match against Ludogorets on Thursday will also be played behind closed doors because of fears about the possible spread of the virus.

Inter were one of four Serie A clubs to postpone their games last weekend.

League leaders Juventus are ahead of second-placed Lazio by one point before they face third-placed Inter on Sunday evening.