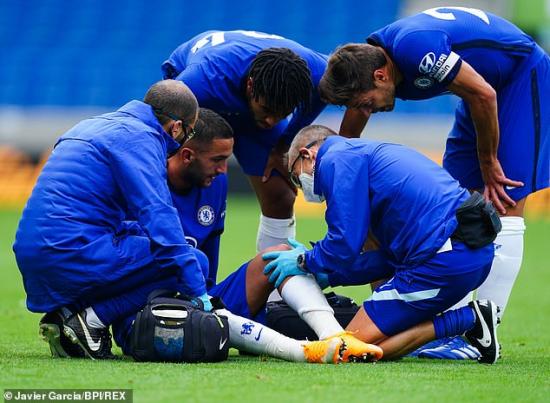 Chelsea manager Frank Lampard has confirmed he will be without three of his summer signings for the trip to Brighton on Monday with Hakim Ziyech, Thiago Silva and Ben Chilwell all out of contention.

The Blues have splashed out more than £200million on new recruits in this transfer window, outlining serious ambitions for the Premier League title, but while many fans would have been excited to see their new stars in action, the Chelsea legend said a large handful of them would have to wait for their debuts.

Speaking at a press conference ahead of their season opener against the Seagulls, he said: '[Hakim] Ziyech took an injury to his knee in the friendly against Brighton, he won’t be fit. We’re working with him and hoping it’s a matter of weeks. We’ll have to see on that one,” he told via Chelsea’s official website.

Ziyech sustained a knee injury during the second half of the friendly game against Brighton earlier last month and Lampard has revealed that the Moroccan will be out for a couple of weeks.

Chilwell has yet to achieve match fitness after recovering from a heel injury sustained at Leicester City and Lampard has ruled out his availability for the south-coast trip as well as another summer signing Thiago Silva.

'Ben Chilwell is working towards fitness but won’t be fit either, but he’s improved which is good news for us. Thiago Silva is in London but not training with us until the weekend. I doubt very much he’ll be in contention.'

Chelsea will play as guest to Brighton and Hove Albion on Monday, September 14 at 7:15 pm.