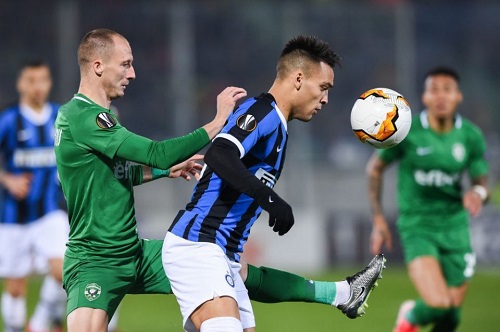 Inter Milan are expected to play their home Europa League last-32 match against Ludogorets behind closed doors because of fears about the spread of coronavirus.

Inter were one ofÂ four Serie A clubs to postponeÂ their weekend game.

Talks have been taking place between the club, Italian government officials and European football's governing body Uefa about Thursday's fixture.

With 165, Italy has the largest number of cases of the virus in Europe.

Many schools and colleges have been closed in Milan on Monday, although the local transport system is operating.

More than 600 Ludogorets fans were due to travel from Bulgaria for Thursday's Europa League last-32 first-leg match at the San Siro (20:00 GMT kick-off).

It is not known whether any restrictions will be applied to Sunday's Serie A match between Juventus and Inter in Turin. The teams are first and third respectively in Italy's top flight.

However, after a meeting of league officials on Monday, Italian football federation (FIGC) president Gabriele Gravina said: "For our Serie A championship we have planned for and asked to play the games behind closed doors.

"That could happen as early as Sunday."

Speaking on television on Sunday Italian prime minister, Giuseppe Conte, discussed the possibility of postponing more matches: "I too am a sports fan, and we will have to suffer a little bit, but at this point in time I wouldn't even know whether these measures [prohibiting large gatherings] will continue to be enforced into next week."

In the regions of Lombardy and Veneto, a lockdown is in place in several small towns. For the next two weeks, 50,000 residents will not be able to leave without special permission.

Even outside the zone, many businesses and schools have suspended activities, and sporting events have been cancelled.

About 77,000 people in China, where the virus emerged last year, have been infected and nearly 2,600 have died.

More than 1,200 cases have been confirmed in about 30 other countries and there have been more than 20 deaths. Italy reported two more deaths on Monday, raising the total there to five.

In rugby union, Italy v Scotland in the Women's Six Nations was postponed on Sunday.

Pro14 games involving Ospreys and Ulster in Italy next weekendÂ have been called off.Â Ospreys were due to play Zebre in Parma with Treviso the venue for Ulster's game against Benetton.

The Italian Rugby Federation has suspended its National Championship and youth games next weekend.