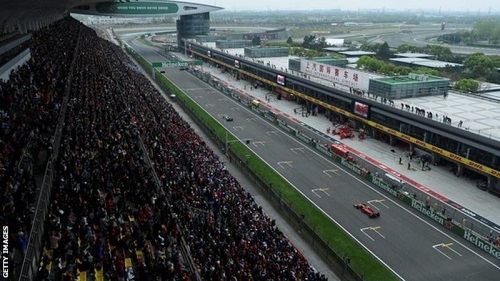 The Chinese Grand Prix has been postponed as a result of the coronavirus outbreak.

The FIA, Formula 1's governing body, has accepted a request from Chinese organisers to postpone the Shanghai race, due to take place on 19 April.

In a statement, it added all parties would take the "appropriate amount of time" to discuss potential new dates.

The decision has been made to "ensure the health and safety" of drivers, staff and fans.

"The Chinese Grand Prix has long been an important part of the F1 calendar with many passionate fans," the statement continued.

"The FIA F1 community looks forward to racing in China as soon as possible and wishes everyone in the country the best during this difficult time."

F1 managing director Ross Brawn has previously said there would be efforts toÂ reschedule the raceÂ if it could not be held on its original date.

"We will leave open the opportunity to see if the race can run later in the year," he said.

"China is an enthusiastic, growing market so we'd like to have a race in China."

The last time a race was postponed was 2011, when the Bahrain Grand Prix was affected by the Arab Spring uprisings.

The initial intention then was to run the race later in the year but the teams objected and in the endÂ the race was cancelled.

There have now been more than 40,000 cases of the new coronavirus strain worldwide, and it has been declared a global health emergency.

Earlier this month, sports authorities in ShanghaiÂ recommended the suspension of all sporting events in the city.

The Shanghai Sports General Association instructed sports bodies to suspend events until the threat from the virus was over.

They were told to "formulate a plan for epidemic prevention to avoid internal infections" and to "implement a daily hygiene management system and strengthen health education to urge employees to protect themselves".

The virus outbreak has already led to the cancellation of a number of sporting events in China, including the World Athletics Indoor Championships in Nanjing, scheduled for 13-15 March, and a race of the all-electric Formula E series in Sanya the following weekend.

Olympic organisers also say they are "seriously concerned" about the spread of coronavirus and the impact it could have on the Tokyo Games in Japan this July and August.

The postponement of the grand prix was an inevitability and Formula 1 was just waiting for the official request from the race organisers to push the button on it.

The FIA has said it will look at "potential alternative dates" later in the year - but even assuming the virus outbreak becomes more under control, the chances of the race happening this year are slim.

Firstly, there is the open-ended question of when holding a major international sporting event in China will be considered safe again.

Beyond that, there is the congestion of the F1 calendar and the fact that the teams have to agree to any rescheduled date.

F1 has already suggested to the teams the idea of running China the week after the Hungarian Grand Prix, which would mean a date of 9 August and cut into the sport's summer break. The teams have rejected this idea.

Once F1 returns at the Belgian Grand Prix, there are nine races in 14 weeks to the end of the season.

Slotting in China between Italy and Singapore on 13 September would mean a run of five races on consecutive weekends.

Between Russia and Japan on 4 October, Japan and the USA on 18 October, or Mexico and Brazil on 8 November would in each case mean four consecutive race weekends (not to mention, on the last of those, the questionable practicalities of flying to Asia between two events in the Americas); and between Brazil and Abu Dhabi on 22 November three consecutive races to end the season.

The teams are unlikely to agree to any of these, given the expense and disruption involved - and a date that extends the season into December would be equally unpopular.

As a result, F1's record 22-race season looks like it will have to wait at least another year.