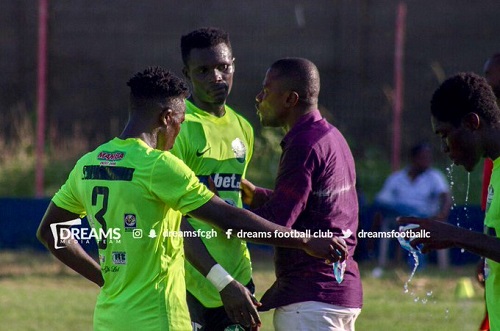 Head coach of Dreams FC Wilfred Dormom has lamented about his outfit inability to kill off games ahead of the new season.

His comments come on the back of a friendly game against Great Olympics to keep up in shape as the Ghana Premier League kicks off later this month.

The friendly played on Sunday at the Nii Amoah Okramansa Park in Amrahia ended to a 1-1.

Ofotsu Eric gave Dreams FC the lead in the first half after taking advantage of a misplaced pass. Striker Richard Addae scored the equaliser for Olympics to ensure the game ended in a scoring draw.

Dormon after the game said he has identified weakness in his outfit which he is using the few weeks left to the start of the League to sort it out.

"We are still on the road to getting the team in shape, we have basically about four weeks and we have switched gear to high-intensity profile matches. You will realise that In the last three weeks, we've played Wa All Stars, Liberty Professionals and Great Olympics."

"I think we controlled the game very well but it is unfortunate that our decision to kill the game when the moment comes is a big problem."

Dreams have drawn their last 3 friendly against Wa All Stars, Liberty Professionals and Great Olympics in a 1-1 scoreline.

The Ghana Premier League is expected to begin on the weekend on December 21-29 after a long hiatus.