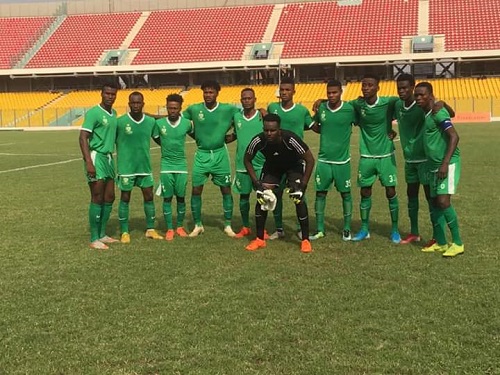 Ghana Premier League club Elmina Sharks have denied and described as untrue rumours that they have slashed their players' salaries by 65%.

Rumours were rife that, the Ghana Premier League club have implemented a pay cut without the knowledge of their players.

According to the reports, the players only got to find out their salaries have been reduced after going to the bank to cash out.

But speaking to OTEC FM in Kumasi, the club's spokesperson Sedenam said the reports circulating are untrue and that there was a mishap in the bank transactions.

"Management has not taken any decision of slashing the player’s salary, there is no truth in those speculations. We (Management) got alert from the head coach, Yaw Acheampong on Wednesday that some players are complaining about 65% slash on their salaries."

"We quickly got in touch with the accounts department to find out what has happened," he said.

"After our accounts department called the bank, They told us (management) that there was a discrepancy, so we instructed them to do everything possible to rectify the situation, according to the bank, those rectifications were done from last Friday to this Monday."

He added, "It was an error transnational problem between our accounting department and the bank that supposed to do the payment."

"The team has not decided or taken any decisions to cut any player salary, whatever is due to the player's, is what we are given them."