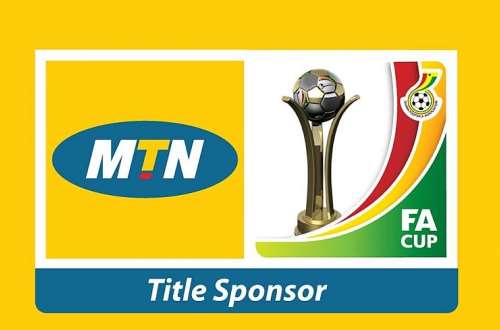 The Ghana Football Association (GFA) has announced that Scancom PLC (MTN Ghana), the leading telecoms company in Ghana has once again extended their long sponsorship relationship for the FA Cup for Three (3) more seasons with a total sponsorship package worth over  Four Million Ghana Cedis (GHC 4,000,000.00).

Commenting on the new agreement with the GFA, the Chief Marketing officer for MTN, Mr. Noel Kojo-Ganson expressed his delight about the opportunity given MTN to continue to brighten the lives of professionals in the football fraternity and the teaming fans who have over the years benefited from the revival of the FA CUP Tournament in Ghana since it was relaunched in 2010.

He said, “as a company that connects people, we are happy to use football as an avenue for our customers to entertain themselves and rejuvenate. “We, therefore, are confident that the ensuing benefits of the revival of the game will go a long way to strengthen the existing Football Clubs, unearth more talents, drive competition and make Ghana Football the envy of Africa. “

The GFA commenced this great relationship with MTN in the 2010-11 season, to revive the FA Cup competition which had then been off the football calendar for a decade. Since the first agreement, the parties have renewed the sponsorship on two occasions – 2013 and 2017 at a total sponsorship package of GHc1,100,000.00 per year (that is GHC800,000 cash and GHC 310,000 MTN Recharge cards/products).

The last agreement was truncated due to a scandal that hit the Association following an investigative piece by Anas Aremeyaw Anas.

Winner of the MTN FA Cup receives a giant trophy, cash and products from MTN and qualifies to play in the CAF Confederation Cup competition.