French Open: Djokovic, Nadal and Alcaraz in same half of draw 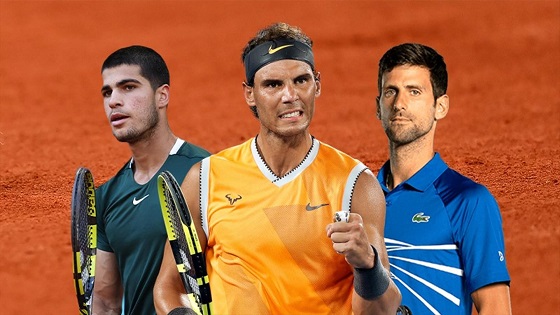 The draw for the 2022 French Open threw up some mouthwatering encounters with Novak Djokovic, Rafael Nadal and Carlos Alcaraz all in the same half.

Djokovic made an appearance at the ceremony for the draw at Roland-Garros and was presented with possibly the worst-case scenario with both Spanish clay-court superstars on his side of the draw.

Nadal, who won his 21st Grand Slam singles title at the Australian Open earlier this year, could await Djokovic in the quarter-finals in what would be a repeat of their semi-final epic last year. A possible treat for the winner? A clash with the high-flying Alcaraz.

The 34-year-old Djokovic, who will make his Grand Slam return having missed the Australian Open, will open up with a match against Yoshihito Nishioka of Japan, while Nadal will take on Australia's Jordan Thompson first up. Alcaraz will face a qualifier to open his campaign.

Daniil Medvedev and last year's runner-up, Stefanos Tsitsipas, were featured in a wide-open bottom half of the men's draw, along with Casper Ruud and Andrey Rublev.

Britain's Cameron Norrie, who is seeded 10th for the tournament, will take on French wildcard Manuel Guinard, while 29th seed Dan Evans will face Francisco Cerundolo of Argentina.

In the women's draw, Britain's Emma Raducanu and world No. 1 Iga Swiatek will each face qualifiers in their first-round matches at Roland-Garros.

The 18-year-old US Open champion will then take on either Aliaksandra Sasnovich or Wang Xinyu in the second round if she can progress through her opening challenge in Paris. Looking further ahead, the Brit could face a tough match against Ons Jabeur in the last 16.

For Swiatek, the Pole could face Karolina Pliskova in the quarter-finals if she continues her sensational current form as she looks to take back the title she won in 2020 in hugely impressive fashion.

Looking to extend her remarkable 28-match winning streak, Swiatek is the overwhelming favourite to clinch her second title in Paris this year and will take some stopping on the red dirt.

Naomi Osaka was handed a challenging opening encounter with the in-form Amanda Anisimova, who beat the Japanese star in the third round of the Australian Open earlier this year.
As for former champion Simona Halep, who is now working with Serena Williams' coach, Patrick Mouratoglou, the Romanian could take on Swiatek in a mouthwatering fourth-round clash.

Britain's Harriet Dart was drawn to play against Martina Trevisan of Italy in her opening match, while Heather Watson faces Elsa Jacquemot of France.