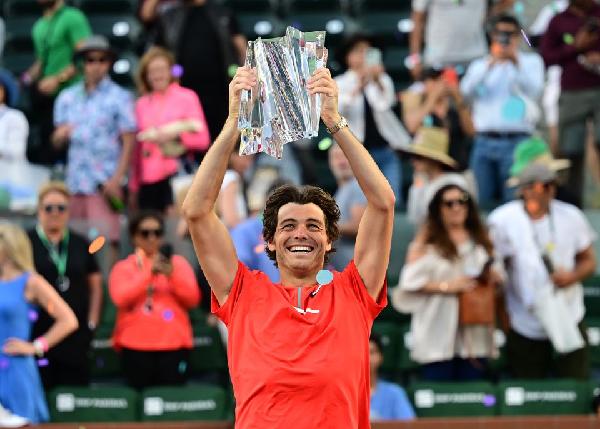 A wounded Taylor Fritz brought Rafael Nadal’s 20-match winning run to an end with a 6-3 7-6 (5) victory in the Indian Wells final on Sunday, becoming the first American to lift the title since Andre Agassi over two decades ago.

Home favourite Fritz gave fans what they came to see – an heroic effort and an American winner, denying Nadal what would have been his fourth title of the season and a record-equalling 37 ATP Masters 1000 championships.

Nursing an injured ankle, Fritz said after collecting his second career title he had had doubts he could even take to the court and had never before experienced such pain prior to a match.

But the 24-year-old American decided to gut it out and was rewarded with the biggest win of his career, fighting off the 21-time Grand Slam winner.

“This is just one of those childhood dreams you just think would never come true,” said Fritz.

“I can’t even describe how ridiculous it is how I could play today.

“I have never experienced worse pain in my life before a match.

“If I knew it was going to be that bad, I wouldn’t have come out here. I took a couple of change-of-direction steps and screamed and honestly I was trying to act tough because I had cameras on me.

“We did a lot of work leading up to the match and I went through a rollercoaster of emotions before the match thinking there’s no way I could possibly play today.”

Both players had fitness concerns hanging over them coming into the final.

While Fritz was struggling with an ankle problem, Nadal was dealing with a chest issue he had picked up during an epic three-set semi-final battle with 18-year-old compatriot Carlos Alcaraz.

The 35-year-old Spaniard was clearly out of sorts to start the match, with Fritz breaking him twice on the way to a 4-0 lead.

But as he has so many times before, Nadal refused to wave the white flag, twice holding the serve and breaking the American to get to 5-3, sending a buzz through the packed stadium.

Fritz would regroup and halted Nadal’s rally with a third break to grab a one-set lead.

At the end of the opening set, Nadal called for a medical timeout and returned to the court with renewed purpose.

One of the game’s great battlers, Nadal forced the second set to a tie-break, but in the end the big-serving American proved too strong.