Novak Djokovic wins his first title of 2022 at Italian Open 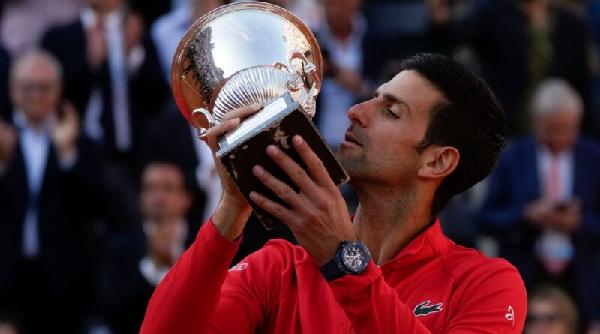 World number one Novak Djokovic boosted his preparations for next week's French Open by winning his first title of the year at the Italian Open in Rome.

The Serb, 34, cruised through the first set, and then fought back after the Greek took a 4-1 lead in the second.

Djokovic will be one of the favourites as he chases a record-equalling 21st Grand Slam at the French Open, which starts next Sunday in Paris.

"I could not ask for a better lead-up to Roland Garros," said Djokovic.

"I'm going to Paris with confidence and good feelings about my chances there."

After a troubled start to the year, when he was deported from Australia because of his vaccination status, before going to suffer early exits in subsequent tournaments, Djokovic looks to be finding form.

By beating Tsitsipas impressively in Sunday's final, he secured a sixth title in Rome - and a record-extending 38th win in a Masters event - going through the tournament without dropping a set.

His start on the clay was rusty with a first-round exit in Monte Carlo, but he has gathered pace with the semi-final in Madrid and now the Rome title in the last major tournament before Roland Garros.

Given Rafael Nadal's foot injury issues, Djokovic's main rival at Roland Garros could be 19-year-old Spaniard Carlos Alcaraz, who has surged to sixth in the rankings with clay-court titles in Madrid and Barcelona.

"After everything that happened at the beginning of the year, it was important for me to win a big title, especially with Grand Slams coming up where obviously I want to play my best," added Djokovic.

"Everything that I was feeling in the first few months of the year, as much as I've felt pressure in my life and my career, that was something really on a whole different level.

"But I feel it's already behind me. I feel great on the court. Mentally as well. I'm fresh. I'm sharp."