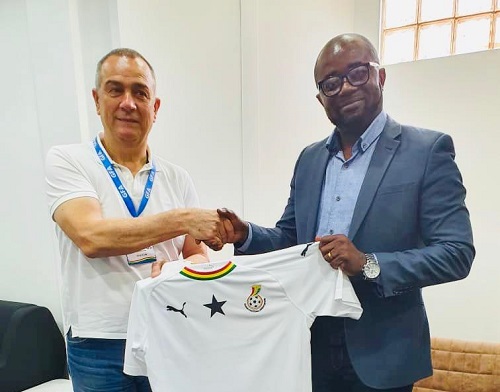 The delegation was made up of the Clubâ€™s Sports Director Moreno Pavon, Juan Francisco Botron and other local representatives including Ghana legend Rev. Osei Kofi.

President Kurt E.S Okraku welcomed the delegation to the GFA Secretariat and expressed delight for the visit and reiterated the GFAâ€™s commitment to support any initiative that will lead to the development of football talents.

He added that the Association welcomes any support and investment in youth football development.

On his part, President Felipe Moreno Romero said that CD Leganes is in Ghana to set up an academy for youth football development and also to pursue other social projects in the country.

He intimated that the club deems it fit and prudent to call on the GFA and to congratulate President Kurt Okraku on his election as well as identify ways they can collaborate with the GFA in other aspects of the game.

He further stated that, CD Leganes doors are open to the GFA anytime the Association has an international assignment in Spain.

President Okraku lauded the Clubs willingness to support Ghana Football and added that, it will be very great to include the technical teams of the various national teams.

General Secretary Prosper Harrison Addo and Head of National Teams Department Alex Asante were all present as the two parties exchanged gifts and firmed the mutual relationship between the GFA and the Club.