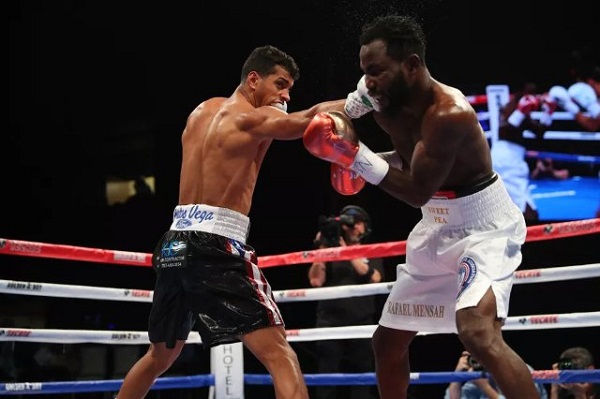 Puerto Rico’s Alberto Machado was too big, too strong and too good for Ghana’s Rafael Mensah in their fight for Machado’s WBA world super featherweight title Saturday night.

Machado dropped Mensah in the first round and mostly dominated the smaller Mensah to retain his belt.

All three judges scored the fight 120-107 in favour of the impressive Machado.

Machado improved to 20-0 but didn’t record the knockout it appeared was inevitable early in their fight. Mensah lost for the first time as a professional (31-1, 23 KOs).

Mensah, a nephew of former welterweight champ Ike Quartey, entered this bout unbeaten but built his record largely against journeymen and opponents with losing records.

Machado made the first defense of the WBA 130-pound title he won in his last fight.

The 27-year-old Machado overcame a fifth-round knockdown during that bout to knock out Panama’s Jezreel Corrales (22-2, 8 KOs, 1 NC) in the eighth round of that October 21 bout in Verona, New York.

He was stripped of that title at the weigh-in the day before he lost to Machado.

Mensah demonstrated toughness by reaching the final bell Saturday night. He didn’t do much to test Machado, though, other than taking Machado 12 rounds for the first time in Machado’s career.

A straight left hand by Machado backed Mensah into the ropes late in the ninth round. That was the last time Machado seemed to hurt Mensah in their 12-rounder.

The right side of Mensah’s face was severely swollen by the sixth round. He had more success in the sixth, seventh and eighth rounds than earlier in the bout, but still couldn’t do enough to win those rounds.

Machado’s punch output began slowing down during the sixth, seventh and eighth rounds. He still stung Mensah enough with straight left hands to control the action in those rounds.

Machado spent the entire fifth round knocking Mensah around the ring by hitting him with straight left hands and right hooks.

An aggressive Machado made Mensah fight off his back foot for much of the third and fourth rounds. Machado consistently landed straight lefts and right hooks in those rounds, when Mensah struggled to keep Machado off him.

Machado buckled Mensah’s legs by landing a straight left hand with 13 seconds to go in the fourth round.

Machado found a home for his straight left hand throughout the second round. One of those lefts backed Mensah into the ropes with 12 seconds remaining in that round.

Machado caught Mensah with a flush right hook that sent Mensah to the seat of his trunks late in the first round. A stunned Mensah made it to his feet and survived to the end of the round.