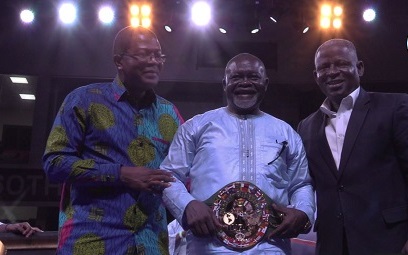 The WBC and WBL also added a vase and specially designed jacket as he marked his 60th birthday.

Azumah Nelson received the items on Friday July 21, 2018 at the Bukom Boxing Arena where the Azumah Nelson Fight Night was held as part of activities marking the icon’s birthday anniversary.

The belt from the WBC is engraved with flags representing the countries of all the boxers Azumah Nelson faced during his illustrious 19-year career.

The boxing legend received several goodwill messages on the day and notable among them was from his fiercest rivals and retired Australian boxer Jeff Fennec who described his one-time foe as a ‘good friend’.

The 3-time Super Featherweight champion turned 60 last Thursday and tributes have been pouring from across the world to celebrate his feat in boxing and outstanding personality.

On February 8th 2004, Azumah was inducted into the World Boxing Hall of Fame becoming the first and so far the only African to achieve that feat.

He is currently the 17th greatest pound for pound boxer of all time according to the Boxer's ranking.