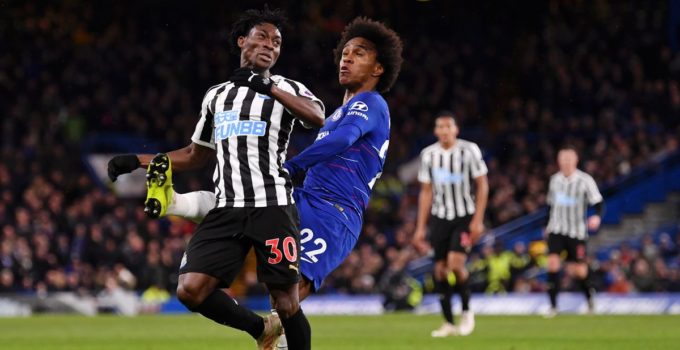 Newcastle United crashed to a 2-1 defeat against Chelsea in the Premier League on Saturday, January 12.

Goals from Pedro and Willian ensured the three points for Maurizio Sarri’s men.

The Spaniard gave the home side a well-deserved lead early on in the game but Newcastle did exceedingly well to get back into the game.

Ciaran Clark scored in the 40th minute to level things up for the visitors but Willian managed to score the winner in the second half with an outstanding curling effort.

The Magpies won’t be too disappointed with their performance but the result puts them under a lot of pressure. Rafa Benitez’s men are now 18th in the Premier League table.

Newcastle could have taken something from the game with a bit more efficiency. They were quite wasteful with the ball and Christian Atsu should have done better.

The winger had a mediocre game and the Newcastle fans took to Twitter to share their thoughts on his display.

Here are some of the reactions:

Atsu playing like he has won a competition to play today

We scored from a Ritchie corner. But at least three times after that played a short set piece to Atsu who didn’t manage a successful delivery all evening - that level of stupidity is unjustifiable.