I deserved to win the 2020 Ballon d'Or - Lewandowski 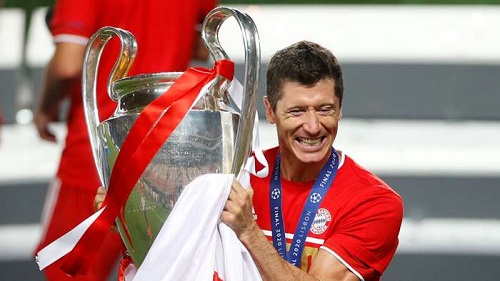 Bayern Munich striker Robert Lewandowski has said that if he were in charge of handing out the Ballon d’Or this year, he would award it to himself.

The Pole helped Bayern to win the Bundesliga, DFB Pokal and Champions League, with the hitman the leading scorer in each of those competitions.

It was the best season of his career to date as he found the net on 55 occasions in just 47 matches, notably scoring in every Champions League match he played until the final.

He will not, however, have the opportunity to win the coveted individual accolade, with France Football, who organise the award, having elected to shelve it for a year because of the coronavirus crisis.

For many people, he was the outstanding candidate – and that includes himself.

“We won everything there was to be won. I was the top scorer in every competition. I think if a player has achieved that much, he should win the Ballon d'Or,” he told Onet.

He credited Bayern’s success in Europe, which came after a spectacular 8-2 quarter-final victory over Barcelona, a 3-0 semi-final success over Lyon and a 1-0 final win over Paris Saint-Germain, to the strength in depth of their squad.

“If Philippe Coutinho and Ivan Perisic come on in the 80th minute, then the opponent knows what is going on: they realise that we do not intend to stop pressing. That makes them insecure,” he explained before going on to discuss the tremendous self confidence in the squad.

“Before the game, we knew we were going to beat Barca. Some even said it would be a 5-1 - but an 8-2 is something completely different. We were very confident.

Quizzed about interest from Real Madrid last summer, the 32-year-old said that he had no intention of leaving the Allianz Arena: “During this phase I felt the support from FC Bayern, which was sometimes a little lacking before. Ultimately, I believed in the FC Bayern project.

“I want to play at the highest level after 2023. And I'm not yet thinking about what I'll do afterwards.”