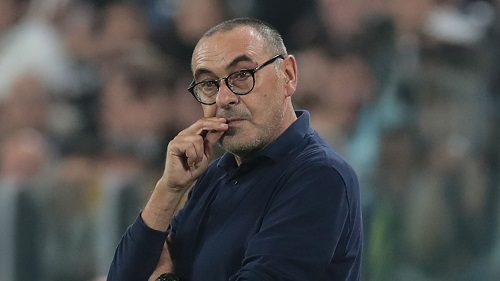 Maurizio Sarri admits he is not a big fan of VAR and is still struggling to grasp all the “absurd rules” ahead of Juventus’ derby with local rivals Torino.

Referees have been in the spotlight again this week as they preferred to go with their own controversial decisions rather than get a second opinion from the VAR.

However, Sarri believes the officials were right to stand by their original judgments.

“I prefer when the officials control the game on the pitch,” he said at a Press conference.

“Not all situations need to be communicated. When there is a handball, I still haven’t been able to grasp the rules.

“Also, in everyday life there are absurd rules and we need to adapt to them. I say I don’t like it, it was born to identify macroscopic errors, now it is used three or four-times a game. They have a more limited use of it abroad.”

The Coach is preparing for his first Derby della Mole with Juve, who have long had the edge on Toro...

“It’s a historical match on its own, no matter at what stage we are at in the season. I think we will be facing a highly-charged Torino as it is a very important derby for them.”

“It’s very important to keep the match on our tracks, sometimes it’s possible and sometimes not. I will say that it will be important we control the match tomorrow and keep it on our terms.”

“A derby is never a normal match. Right now, every match is important. I hope it will help us prevent becoming mentally tired.

“In London the derby is felt in a different manner, I will try to live this one in the best possible way.”

Miralem Pjanic pulled up with a muscle problem in the 2-1 win against Genoa, so will he make it tomorrow?

“I don’t know, yesterday he was training alone. He was in a meeting with the medical department, I don’t know if he can play tomorrow.

“[Aaron] Ramsey looks good, at least in training. Gonzalo [Higuain] is a great player. Last summer I saw him highly motivated, but in London I was less pleased. When he is motivated, he is a very important player.

“Ronaldo prefers to operate on the centre-left, Dybala on the centre-right, but neither of them are wide forwards so a pure front three with them isn’t suitable.”

Finally, the former Chelsea and Napoli boss also touched on the Superga disaster and how he feels it’s necessary to pay tribute.

“I came with Napoli and Empoli in the month of May, it felt it was my duty to go and pay tribute to legends of the sport [the Grande Torino team who died in the plane crash].

“I gladly did. I felt it was obligatory because the Grande Torino side are legendary in Italian football.”