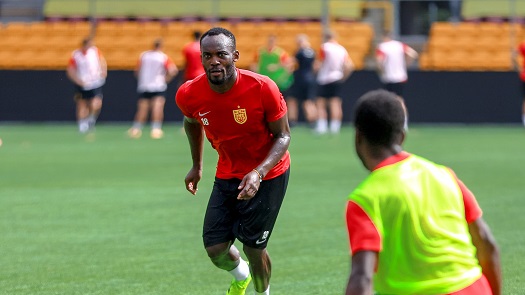 Former Ghana and Hearts of Oak defender Sam Johnson has expressed excitement for Michael Essien who has landed his first coaching appointment at FC Nordsjaelland.

The former Chelsea and Ghana midfielder, Essien has joined the coaching staff at Danish side FC Nordsjaelland for the 2020/2021 season.

The 37-year old who recently spent some time at the club as he pursues his coaching badges has now agreed to become a player-coach, under the guidance of head coach Flemming Pedersen.

"I am delighted to have joined FC Nordsjaelland coaching staff as part of my development towards my full coaching licence," Michael Essien posted on social media.

"I will also be assisting the players on and off the pitch as part of my role."

According to Sam Johnson, the news of the 2006 BBC African Footballer of the Year being appointed as a coach didn't really surprise him and lauded the player for planning to remain him the game should the time for him to hang his boots.

Speaking to Peace FM, he said he is very happy for Michael Essien for pursuing a coaching career as well as following his mates which include Laryea Kingston who wants to be in the dugout.

Danish club FC Nordsjaelland on Wednesday announced that Michael Essien will be working with the club's coaching staff for the 2020/2021 season.

A club statement read: 37-year-old Michael Essien visited FC Nordsjælland a couple of weeks ago for a week as inspiration for his ongoing coaching education.

Here he got the opportunity to be part of the work around the Superliga team and several of the club's academy teams, just as he got a better knowledge of the teaching and development of young people off the field in FCN.

Now Essien will contribute himself, as he has agreed to become part of the club's coaching team under Head Coach Flemming Pedersen in the coming season with the title Player Coach.

Essien will thus be part of the coaching team in an assistant role at the same time as he can and will participate in the training sessions to implement the exercises in the best possible way and be able to contribute new input to the coaching team's evaluations. He will have his first working day in Farum on 10 September.