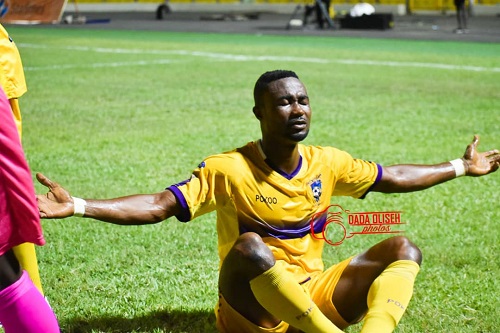 Medeama SC striker Prince Opoku Agyemang has stated that his target for theÂ ongoing 2019/20 Ghana Premier League is to emerge the top scorer.

The forward who joined the Tarkwa-based club recently on a three-year deal from Division One League side New Edubiase is on 11 goals following his brace in yesterday's win over Legon Cities and a goal shy of top scorer Victorien Adebayor.

In a post-match interview after the win against the Royals, striker Prince Opoku Agyemang revealed that he is keen on winning the Ghana Premier League golden boot.Â

He revelled his outfit victory at the Accra Sports Stadium that at seen them consolidate their lead at the top of the Ghana Premier League.

Opoku was in devastating form as he aided the Mauve and Yellows to a win over Legon Cities in matchday 15 of the Ghana Premier League.Â

The former New Edubiase attacker two first-half goals was enough for the visitors to ran away with the 3 points at the Accra Sports Stadium.

LIVE GOAL: Prince Opoku Agyemang gets his brace of the evening and @MedeamaSC 2nd. 2-0 they lead @LegonCitiesFC pic.twitter.com/XEOLCTw1RR

Medeama next host Berekum Chelsea at the Akoon Park, Tarkwa.