I will be happy if Thomas Partey joins Arsenal - Kasim Nuhu 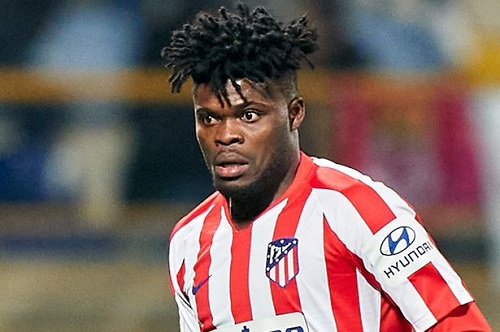 Arsenal target Thomas Partey has been encouraged to move from Atletico Madrid to the Premier League - so he can play in "the best league in the world".

Partey has long been on Arsenal's radar, although the midfielder has also been linked with Liverpool, as Atletico are reportedly interested in offering him in a swap deal for Alex-Oxlade Chamberlain, while Manchester United have also been credited with an interest.

The 26-year-old has been a key player for Los Rojiblancos this season, having started all their Champions League games and played 24 of their 27 La Liga matches.

But Partey's Ghana teammate Kasim Nuhu urged his pal to jump at the chance of a move to England if one of the Premier League rivals triggers his £45million buyout clause.

"The two teams always make the same category in the league, fighting for the third and fourth place to play in Champions League.

"But as we all know the Premier League is the best league in the world so if he joins Arsenal I will be happy for him."

Atletico are resigned to losing Partey this summer but are keen on a swap deal with Liverpool in a bid to sign Oxlade-Chamberlain, according to The Sun.

Oxlade-Chamberlain has made just 13 league appearances under Jurgen Klopp this term, with midfield the Reds' most competitive area.

The 26-year-old's quest to become a regular on Merseyside was hampered massively by a knee injury sustained in 2018 that kept him out for months.

But he remains a quality performer and has three years on his current deal.

It took £20m to prise the right-back from Tottenham but he has waxed lyrical about the club and especially Diego Simeone since his move.