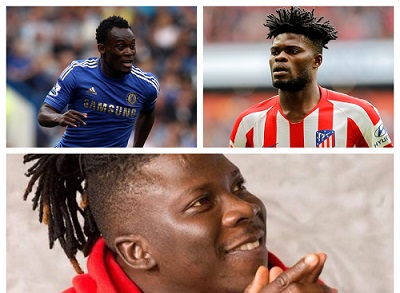 Ghana Afropop and Dancehall musician Livingstone Etse Satekla, known by his stage name Stonebwoy has added his voice to the ongoing debate about who the best midfielder is between Thomas Partey and Michael Essien.

According to 'Sobolo' hitmaker, it's a non-starter for people to compare the Atletico Madrid midfielder Thomas Partey to the former Chelsea player Michael Essien.

He added that Essien is a senior man in the game and that respect should be accorded him.

The duo have attracted comparisons from fans in the past week due to their impressive performances for club and country.

Their comparison set Twitter ablaze over the weekend as some users said it is wrong to compare the Atletico Madrid midfielder to Essien while others claim Partey is the better player of the two.

Ah so are you saying Partey is a better Midfielder than Essien or what? I no dey barb

If you want to slander Essien, get the vim and agend.
So that we can come at you with vim as well 😂 https://t.co/Ix1L2EW98Z

I knw the stat fanatics ll pull out Essien vs Partey stats soon but there is more to football than just numbers.If u are richer than ur father,it doesn't mean u are wiser than him. More often than nt stats r deceptive nd doesn't tell the whole story in football.

The problem with the stat generation is a complete lack of context for anything.

Essien played at a time when the midfield was not Africa class - it was world class and loaded. The team didn't depend on him for goals like it does for Partey. https://t.co/LNo4uq0ToP

Dont chew my Boy!! he's only stating facts.Will be blasphemous to suggest Partey is better than Essien.He won't dare.Let's accept the fact..Essien is a Monster..Bison!! proper defence shield and scorer of many important goals matched with trophies.❤ https://t.co/GHWHVECJUj

And no, Partey is not even playing at Essien's Lyon level when he was the best player in France.

We can appreciate Partey without remotely drawing Essien in. Blasphemy at this stage.

"Partey is better than Essien ever was" pic.twitter.com/hTVYjtqz57

What aaah Essien do Partey no dey do?

You People Are Comparing Partey To Essien Or You're Just Stating Stats.

Have You Ever Wondered Why Partey Wears The #5 Jersey?? It's Because He Wanted To Be Like Essien.