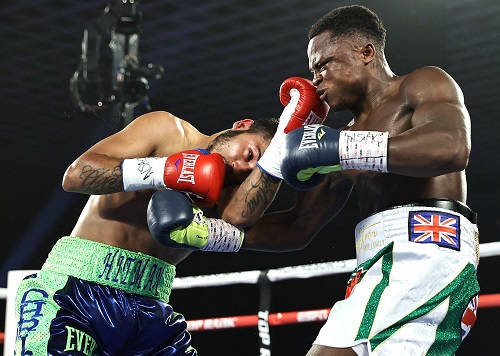 Isaac 'Royal Storm' Dogboe has expressed gratitude to all and sundry for their immense support in his win against Chris Matthew Avalos.

The Royal Storm on July 21 mounted the ring for the first time in 14 months and the boxer did justice to his Mexican-American opponent at MGM Grand in Las Vegas, USA.

Despite being out of the ring for a long time, Dogboe was in dominant fashion as he won every round in the featherweight bout before stopping Chris Avalos with a combination of punches in Round 8, which was the last round.

Speaking after the bout the former WBO Super Bantamweight champion said "I give blessings to the almighty God, it's been a tough 14 months but God has been with me in every step of the way and I am grateful and just wants to say thank you and praise the Lord for my come back and everyone that has been by my side guiding me through this 14 months, it's been a tremendous road but finally we are coming back. I felt great in the ring today."

THAT is how you debut in the Featherweight division. 😤@IsaacDogboe was on point the entire way, and ultimately stoped Chris Avalos in the 8th and final round.#ValdezVelez | LIVE NOW on ESPN pic.twitter.com/bfwbMafmmn

Isaac Dogboe who is now under a new trainer Barry Hunter after the latter took over from Paul Pogboe shared how influential the WBO 2007 Trainer of the Year was on his victory.

"I had to listen I could hear his voice telling me I should take my time and shouldn't force it. Some times i was a little bit tensed so once I went with the flow everything was just flowing."

ALL PRAISE BE TO GOD!!!
THANK YOU ALL FOR THE SHOW OF LOVE AND SUPPORT. LOVE YOU ALL ❤️❤️❤️.
GOD BLESS. 🇬🇭🇬🇧 #DogboeReturns #NEHO #HEADBANGERS pic.twitter.com/xsNHjDh1uu