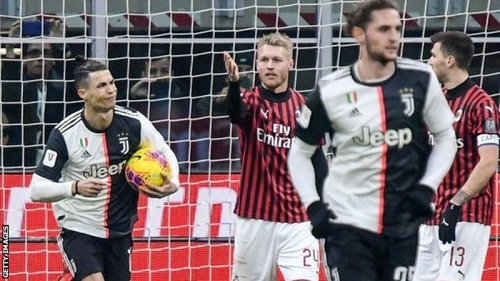 The Italian Cup semi-final second leg between Juventus and AC Milan in Turin on Wednesday has been postponed over concerns about coronavirus.

It came as the Civil Protection Agency said 27 people had died of the illness in Italy in 24 hours, bringing the number of deaths to 79.

Sports events have been banned in three regions - Lombardy, Veneto and Emilia Romagna - plus two provinces.

"The game is postponed to a date to be announced," said a Juve statement.

Â The two teams were due to meet at Allianz Arena with the tie finely balanced at 1-1 after Cristiano Ronaldo scored a late penalty for Juve to rescue a draw in the first leg.

Napoli are due to host Inter Milan in the other Coppa Italia game on Thursday.

Only four Serie A matches took place last weekend, while the entire Swiss top flight has been suspended until 23 March.