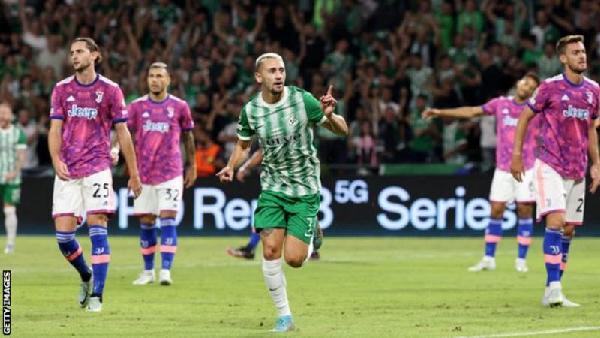 Juventus face a tough task if they are to qualify for the knockout stages of the Champions League after suffering a shock 2-0 loss away to Maccabi Haifa.

Atzili's first came after only seven minutes when Pierre Cornud's cross bounced off Atzili's back and crept in.

The second saw Atzili fire a shot into the top corner after a bright run and pass by team-mate Frantzdy Pierrot.

Juventus only have three points from their four matches, after they had beaten Maccabi Haifa 3-1 at the Allianz Stadium last week.

Massimiliano Allegri's side now have to win at Benfica on 25 October and at home to Paris St-Germain on 2 November to have any chance of making the last 16.

PSG and Benfica, who are level on seven points, meet in Paris at 20:00 BST.

For Maccabi Haifa, this was their first Champions League group-stage victory since a 3-0 triumph over Manchester United in October 2002.

Two-time European champions Juventus are also struggling domestically after a 2-0 loss to AC Milan on Saturday left them eighth in Serie A, 10 points behind leaders Napoli.

Elsewhere, ten-man Manchester City missed a penalty and had a goal ruled out as they were made to wait to reach the last 16 of the Champions League by Copenhagen in a VAR-dominated contest.

A dramatic opening saw two contentious decisions set the tone for the evening.

Rodri's superb 25-yard effort for City was ruled out after Riyad Mahrez was penalised for handling, while the visitors benefited by being awarded a penalty when the ball struck home defender Nicolai Boilesen on the arm as he competed for a corner with Manuel Akanji.

The decision again came after the Portuguese referee Artur Dias was referred to the pitch-side monitor and left the English champions forced to reshape and play the final hour a man down.

City will still qualify for the knock-out phase of the competition if Sevilla fail to beat Borussia Dortmund in Tuesday's other Group G fixture.