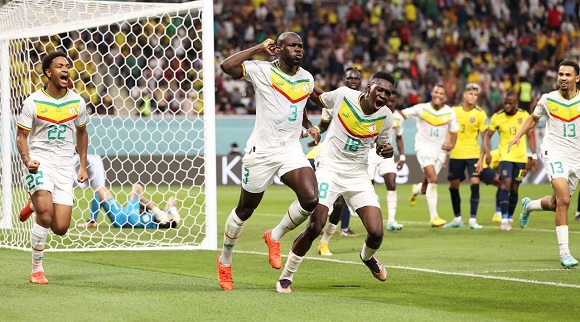 Kalidou Koulibaly’s superb volley earned Senegal a place in the World Cup knock-out stages for just the second time as they beat Ecuador 2-1.

The Chelsea defender’s second half strike, just two minutes after his side had conceded, was enough to secure second spot in Group A, behind the Netherlands, as they picked up a thoroughly deserved victory.

With a place in the round-of-16 at stake for both teams started quickly, there was a frantic and lively start to the game, although it was The Lions who had the better chances as Idrissa Gueye blasted wide, before Boulaye Dia somehow failed to hit the target from close range.

Given the attacking prowess on display at both ends of the field, it was a surprise that it took until the 44th minute for the deadlock to be broken, with Ismaila Sarr, who had earlier past the post, stroking a penalty into the bottom corner after being bundled over in the box by Piero Hincapie.

Ecuador flung on a string of attacking players after the break as they desperately searched for a way back into the game, and they duly equalised on 68-minutes when Felix Torres’ near post flick-on was met by Moises Caicedo, who tapped into a practically empty net.

That swung the emphasis back on Senegal to find a goal, and within seconds they were back ahead as Kalidou Koulibaly volleyed home from close range after Idrissa Gueye’s free-kick wasn’t cleared.

Senegal now go through to the round-of-16, where they could face England or Wales, depending on the result of tonight’s clash.