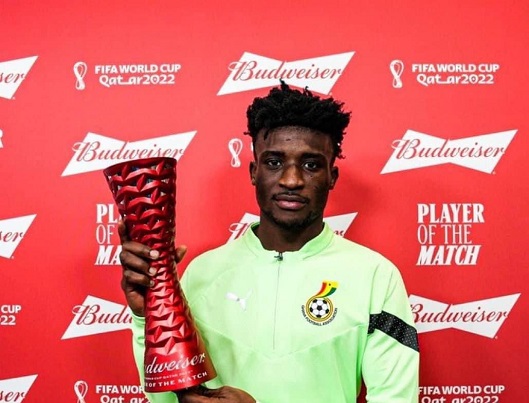 Mohammed Kudus has dedicated his Player of the Match award to the entire team following a scintillating display that earned Ghana a 3-2 win over South Korea at Education City stadium in Doha Monday.

Kudus headed home a Jordan Ayew cross in the 34th minute to take the tally to 2-0 following an opening goal from Mohammed Salisu in the 24th minute but Ghana threw away the 2-0 lead as the Asian giants came back stronger in the second half to draw level through Cho Gue-sung, in the 58 and 61 minutes of the encounter.

Mohammed Kudus again popped up to smash home the match-winner for Ghana in the 68th minute after connecting from a Gideon Mensah cross.

‘’I think we played together as a team and we all deserve credit for this win and the award’’ he told ghanafa.org.
‘’We just have to continue to work hard in the next game to get another victory to take us to the next round of the tournament’’.

''The matches are not easy, all the teams are tough but I have always said we will take the games one after the other and so we will see what happens in the next game on Friday’’.

''We are happy to win today, we will go back home, rest well and prepare for the next match against Uruguay’’ Kudus added.

The Black Stars needed three points to avoid early elimination and looked set to cruise to victory after Mohammed Salisu and Kudus put them up 2-0 at halftime.

Mohammed Kudus becomes the first Ghanaian player to score two goals in One match at the FIFA World Cup since our first appearance in Germany 2006.

The win over South Korea is Ghana’s first World Cup victory since June 26, 2010 when the Black Stars beat USA 2-1 in the Round of 16 of the 2010 FIFA World Cup in South Africa.
Ghana later crashed out of the tournament after losing to Uruguay in the quarter finals.